Children of the Dawnland (Hardcover) 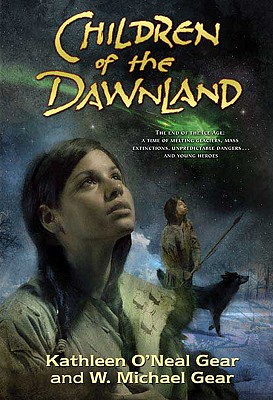 By Kathleen O'Neal Gear, W. Michael Gear
$17.99
Special Request - May Not Be Available

Though only twelve summers old, Twig is a talented Dreamer. Sometimes she has spirit dreams—dreams that come true. But her mother has always discouraged Twig from exploring her powers for fear that they would turn her strange, like the reclusive witch-woman Cobia.

When Twig begins to have recurring nightmares about a green light exploding from the sky and causing widespread destruction, she must find the courage to defy her mother and learn to become a Spirit Dreamer. Helping Twig on her quest are her best friend, Greyhawk, and Screech Owl, a shaman who has been banished from the village. Together, they must persuade their people to leave the land of their ancestors and journey to the mysterious Duskland, far from only home they’ve ever known. Can Twig convince the Elders that she is a true Spirit Dreamer—before it’s too late?

Set 13,000 years ago in what is now the northeastern United States and Ontario, Canada, Children of the Dawnland is an unforgettable adventure about a visionary girl by internationally-bestselling authors and archaeologists Kathleen O’Neal Gear and W. Michael Gear. In writing and researching this book, the Gears visited the archaeological sites in New York, Ontario, Ohio, and Pennsylvania that play a role in the story. By allowing us to see through the eyes of prehistoric cultures, the Gears hope we can learn from them at a time of similar environmental change.

Kathleen O'Neal Gear is a former state historian and archaeologist for Wyoming, Kansas, and Nebraska for the U.S. Department of the Interior. She has twice received the federal government's Special Achievement Award for ""outstanding management"" of our nation's cultural heritage. W. Michael Gear holds a master's degree in archaeology and has worked as a professional archaeologist since 1978. He is principal investigator for Wind River Archaeological Consultants. Together they have written the North America's Forgotten Past series ("People of the Longhouse," "The Dawn Country," "People of the Mist," "People of the Wolf," among others); and the Anasazi Mysteries series. The Gears live in Thermopolis, WY.

“A fast paced adventure set at the end of the Ice Age. The authors skillfully build a world and its culture while spinning an exciting tale.... This character driven fantasy will appeal to fans of epic series such as Erin Hunter’s Warriors and Brian Jacques’ Redwall.—Booklist

“Those looking for an exciting fantasy novel will be pleased by the unusual setting, the well-paced action, and the individual lens on the cultural change at a massive scale. A little bit of Paleolithic speculation wrapped around a spiritual coming of age.”—Kirkus Reviews