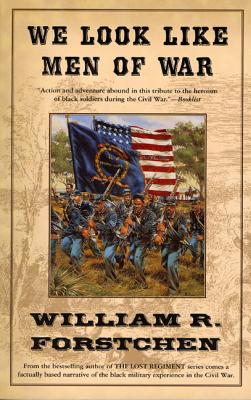 From the bestselling author of The Lost Regiment series comes a factually based narrative of the black military experience in the Civil War.

Thus begins the poignant story of Samuel Washburn, born a slave in 1850. A young master's cruelty leads to an unforeseen confrontation, which forces Sam and his cousin to flee the plantation. They run north to freedom, only to return south to fight for the greater cause.

Though still a boy, Sam becomes a regimental drummer with a "colored regiment" and sees action in the Wilderness campaign at Fredericksburg and Petersburg, as well as at the bloody Battle of the Crater in July of 1864.

Sam's voice offers a unique and insightful perspective on the carnage of the War Between the States and the toll it took on both young and old, black and white.

“Action and adventure abound in this tribute to the heroism of black soldiers during the Civil War.” —Booklist

“William Forstchen is a master storyteller and an accomplished military historian. His skills combine in this fast-paced story of a slave's son who enlists as a drummer boy in the 28th US Colored Troops. The Battle of the Crater is the book's climax. Forstchen's account of that epic fight has no glamour-only the acrid taste of gunpowder, the copper smell of blood, and the enduring message that freedom never comes easily. His hard-edged realism makes this a major contribution to the young adult category of Civil War literature.” —Dennis Showalter, Past President, Society for Military History

“A vivid picture of army life in general and combat in particular, for teachers interested in introducing students to that topic.” —Civil War Book Review

“Exciting, heartwarming, and horrifying all in one, this novel offers moments when readers will feel the patriotic spirit of the 28th USCT and wish they could fight beside them. At other times, readers barely will have the courage to keep turning the pages. Sam is powerful, with more bravery and pride than most teenage characters in literature today possess. This novel is highly recommended for all public and school libraries.” —VOYA