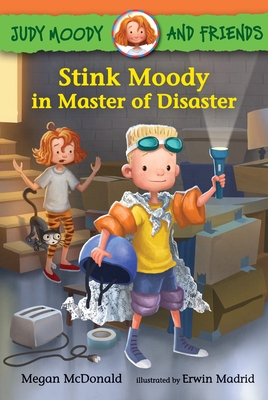 This is book number 5 in the Judy Moody and Friends series.

Look up! Look out! A comet is coming, a comet is coming! Stink is camped out in the backyard with his sister, Judy, and he can’t wait to lay eyes on P/2015 OZ4, also known as the Sherman-Holm Comet. But then news of an asteroid hitting Russia reaches Stink, and suddenly he’s feeling squeamish (and squash-ish) about close encounters of the outer-space kind. Will donning an aluminum-foil cape and building a bunker in the basement help keep him safe? Can this fearless Asteroid Boy save Earth from disaster?
Megan McDonald is the author of the popular Judy Moody and Stink series, including four more Judy Moody & Friends titles. She is also the author of two books for beginning readers: Ant and Honey Bee: A Pair of Friends at Halloween and Ant and Honey Bee: A Pair of Friends in Winter. Megan McDonald lives in California.

Erwin Madrid has worked as a visual development artist for the Shrek franchise and Madagascar: Escape 2 Africa as well as creating conceptual art for video games. He is also the illustrator of The Scary Places Map Book by B. G. Hennessy, and of the four other Judy Moody & Friends titles. Erwin Madrid lives in California.
Readers will be drawn to the lush, inviting scenes.
—Booklist Online