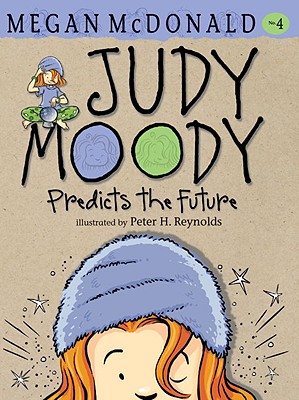 This is book number 4 in the Judy Moody series.

With the help of a mood ring, a Magic 8 Ball, and some old-fashioned intuition, Judy Moody is convinced that she can foretell the future in an episode that’s funnier than ever.

Judy definitely has a mood for every occasion. And now she has a mood ring to prove it! The mood ring’s Extra Special Powers have put Judy in a predicting mood, and her outrageous predictions have everyone wondering if Judy really is psychic. According to "Madame M" (for Moody), the Toad Pee Club’s long-lost mascot will reappear, Judy will earn the coveted Thomas Jefferson tricorn-hat sticker for Great Job, Good Thinking—and love may be the real reason behind her teacher’s new eyeglasses. Will Judy’s adventure put kids in a very Judy Moody mood? (Signs point to yes!)
Megan McDonald is the author of the award-winning Judy Moody series as well as a companion series starring Judy's brother, Stink. She is also the author of the novel The Sisters Club, as well as Ant and Honey Bee, illustrated by Brian Karas. She lives in Sebastopol, California.

Peter H. Reynolds is the illustrator of all the Judy Moody and Stink books. He is also the author-illustrator of the picture books The Dot, Ish, So Few of Me, and The North Star. He lives in Dedham, Massachusetts.

JUDY MOODY PREDICTS THE FUTURE in the famously temperamental third-grader's fourth adventure . . . Here Judy, equipped with a mood ring, convinces herself and her classmates of her clairvoyant capabilities.
—Publishers Weekly

McDonald has a wonderful sense of how eight-year-olds think and behave, and the irrepressible Judy is completely believable as she careens out of control in the classroom . . .
—Booklist