Eternity of Eagles: The Human History of the Most Fascinating Bird in the World (Hardcover) 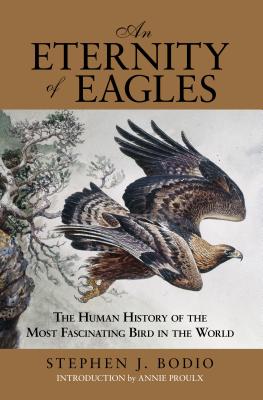 Eternity of Eagles: The Human History of the Most Fascinating Bird in the World (Hardcover)

An Eternity of EaglesThe Human History of the Most Fascinating Bird in the World A compulsively readable natural and social history, An Eternity of Eagles is a profusely illustrated celebration of all things eagle, by a naturalist who has kept eagles himself and ridden with the eagle tribes of Central Asia. "His vivid description of an eagle, if it could imagine itself, is of a 'carnivorous Buddhist.' Through Bodio's insights we get a strange glimpse of these other minds that share the earth with us."--Annie Proulx, author of The Shipping News and Brokeback Mountain From one of the foremost author/naturalists in the country, Stephen J. Bodio, comes a compulsively readable natural and social history of the most beautiful bird in the world -- the eagle, with a lengthy and admiring introduction by Annie Proulx.The Eagle's Shadow traces our love-hate relationship to these "living dinosaurs," from Neolithic rock art and Native American religion through the practices of Kazakh falconers who use them to hunt wolves, and to contemporary art and popular culture.Proulx sums up best the heart of this book: "Those of us who are interested in bird behavior beyond the feeder or the identification guide book find meager pickings when it comes to information. I am fortunate that my house faces a cliff with a river at the base where I can watch raptors, water fowl, and a hundred other species. The nests of a pair of bald eagles and another upriver inhabited by golden eagles are in sight from the breakfast table. I have plenty of books on birds, but the information on why the big eagles do what they do is hard to dig out. Eagle behavior is usually lumped together with the general behavior of the Accipitrids, but a single book focused on the rich lore and sweep of eagledom did not seem to exist... . Bodio's beautifully written and authoritative book, Eagles, is a primary source of information as well as an omnium gatherum from literature, film and mythology concerning these large, striking birds."Stephen Bodio was born and educated in Boston and has lived in a rural New Mexico village for over thirty years. He has traveled extensively in Europe, Africa, and Asia and has written five books.
Stephen Bodio was born and educated in Boston. He has lived in a remote rural village in New Mexico for over thirty years, and has traveled extensively in Europe, Africa, and especially Asia.He has written five books, and has been an editor, writer, and anthologist of many more books and magazines. He was on the masthead of publications as different as English Literary Renaissance and Gray's Sporting Journal, where he also wrote a book review column for twelve years. He reviewed everything from novels to natural history in publications as various as Bloomsbury Review, the Minneapolis Star Tribune, and the London Times Literary Supplement. His articles, essays, and stories have appeared in Atlantic Monthly, Smithsonian, Sports Illustrated, the LA Times Magazine, and many more magazines, as well as in literary quarterlies. For nine years he was the first resident faculty member at Sterling College's Wildbranch Writers Workshop in Vermont, recruited by Annie Proulx. His previous book, Eagle Dreams, was about his adventures riding with the Kazakh horsemen of Mongolia. An except, published in The Atlantic, was included in Frances Mayes' anthology The Best American Travel Writing 2002.Bodio has hunted with falcons for almost fifty years and has bred and trained salukis and their Asian relatives for thirty. He recently completed a book on the natural and cultural history of eagles, and assisted retired Russian scientist and dog expert Vladimir Beregovoy with his translation of a 19th Century Siberian hunter's tales. He is now working on a "book of books" about the best sporting literature of all time. A memoir, a book about the ancient dogs of Central Asia, and a collaboration with his photographer stepson on western travelers in the Szechuan- Tibetan border country, are all in the pipeline. He still lives in Magdalena with his wife, Elizabeth (Libby) Adam Frishman, a second- generation mountaineer, archaeologist, and former Outward Bound trekking guide.

"His vivid description of an eagle, if it could imagine itself, is of a 'carnivorous Buddhist.' Through Bodio’s insights we get a strange glimpse of these other minds that share the earth with us.—Annie Proulx, author of The Shipping News  and Brokeback Mountain “There is so much brute wisdom, sophisticated science, blood magic, and flat out terrific prose in Stephen Bodio’s writing that he makes me think of Merlin, educating Arthur by turning him into other animals for a while. An Eternity of Eagles is worthy of its great subject, which is not only eagles but the earthbound mortals who marvel at them.”
—Jonathan Rosen, author of The Life of the Skies: Birding at the End of Nature “Throughout the world we stand in awe of eagles and Bodio’s exciting chapters provide the information on why we feel so. Along with a general sampling of the different species of eagles, the writer provides a thread of thought throughout that ties them intimately to our cultural history. With a sensitive combination of art (Vadim Gorbatov’s full paintings depicting hunting eagles as never before are truly breathtaking) and the writer’s easy- going and evocative style (a jungle-hunting Harpy eagle will ‘pluck sloths like hairy fruit’) we are given a complete tour of the trajectory of these species in our lives. Read and enjoy this book and gain new knowledge that will vastly broaden your respect and understanding of these ascendant creatures.”
—Tony Angell, artist, naturalist, and author