Dynasties: The 10 G.O.A.T. Teams That Changed the NBA Forever (Hardcover) 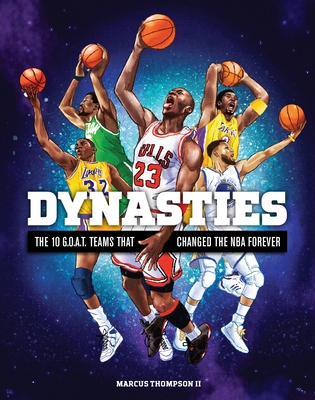 Dynasties: The 10 G.O.A.T. Teams That Changed the NBA Forever (Hardcover)


On Our Shelves Now
Acclaimed sports journalist Marcus Thompson II picks the 10 teams that transformed basketball in this illustrated history of the NBA.  Love it or hate it, being dubbed a dynasty is one of the ultimate accomplishments in team sports.

In Dynasties, Marcus Thompson II contends dynasties are good for the NBA and have pushed the sport to new heights. The ten teams identified have changed the game of basketball forever by raising the bar of greatness, introducing new skills and implementing never-before-seen strategies, all while having a lasting impact on society and culture. From the Bill Russell Celtics and the Michael Jordan Bulls to the Tim Duncan Spurs and the Steph Curry Warriors, each team had its own architect, star, villain, and unbelievable stats.

It is extraordinary to win an NBA championship. It’s legendary to win multiple titles and forever change the game we know and love.
Marcus Thompson II is a lead columnist at The Athletic known for his writing on Bay Area pro sports, especially the Golden State Warriors and the NBA at large. With more than twenty years’ experience, he has developed a respected voice in the industry through his storytelling, ability to connect with athletes, and unique perspective. He is the author of the national bestseller Golden: The Miraculous Rise of Steph Curry and KD: Kevin Durant’s Relentless Pursuit to Be the Greatest. The Clark Atlanta University product lives with his wife, Dawn, and daughter, Sharon, in Oakland, California.
“The debate about NBA dynasties has been raging for decades now, but Marcus takes a fresh, layered and fun look at this age-old discussion and reminds us that the game's best players and teams mattered both on and off the court.”
—Sam Amick, The Athletic

"Marcus Thompson is one of my literary heroes and he shows why in this book, giving a fresh perspective on some of the best dynasties in NBA history, using the Town voice that has set him apart from his peers for nearly two decades."

“Marcus Thompson is the perfect voice for a book like this. His style is so conversational, you just want to grab a blanket, curl up & get comfortable…Once you get started, you're hooked.”

“Have you ever read a book that made you realize exactly why you love basketball? This is the one. Marcus Thompson has written a classic for hoop heads and history nerds to relish. Dynasties shines in its portrayal of what we all secretly love to hate: greatness.”