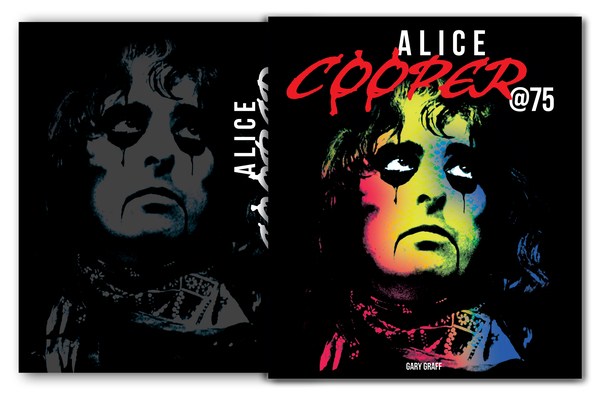 In this exquisitely produced book, experience the extraordinary life and career of the original “shock rocker” through 75 key releases and events.

Pythons, guillotines, stage blood…Alice Cooper is widely considered the godfather of shock rock thanks to his inventive concoction of vaudeville, horror film conceits, and three-chord rock ’n’ roll. In Alice Cooper at 75, veteran rock journalist Gary Graff shows you this rock icon through the lens of 75 career accomplishments, events, and partnerships:

Beginning with his1969 debut LP Pretties for You and continuing through his latestrelease, Rock and Roll Hall of Famer Alice Cooper is regarded as one of the most influential performers and musicians in hard rock and heavy metal, influencing countless acts both visually and musically. This book is your unprecedented retrospective of Cooper’s career from teenage garage rocker to international star and celebrity.

The result is a unique and lavishly produced celebration of the iconic and beloved rock star.

Gary Graff is an award-winning music journalist based in Detroit. He is a regular contributor to the  Billboard, the Cleveland Plain Dealer, Media News Group, Ultimate Classic Rock, Consequence, and other publications, as well as to radio stations in Detroit and Milwaukee. He is the co-author of Neil Young: Long May You Run,  Rock 'n' roll Myths: The True Stories Behind the Most Famous Legends, and Travelin' Man: On the Road and Behind the Scenes with Bob Seger, editor of The Ties That Bind: Bruce Springsteen A to E to Z, and the series editor of the MusicHound Essential Album Guides. He is also co-founder and co-producer of the Emmy Award-winning Detroit Music Awards. Graff lives in Beverly Hills, Michigan.