The Last True Poets of the Sea (Paperback) 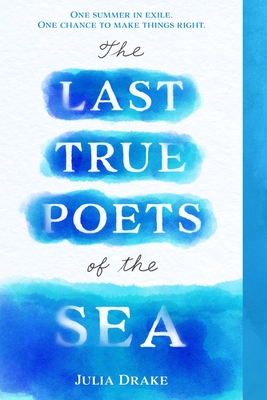 The Last True Poets of the Sea (Paperback)

“Exiled by her family to the small town of Lyric, Maine, after her brother’s suicide attempt, Violet is determined to fulfill his childhood dream of finding the shipwreck the town was named after. Her search for answers begins at the town aquarium, where she finds new friends (and even serenades a lobster). Julia Drake’s debut is that rare book that will take you from tears to laughter with a single page turn. You will be completely swept away by this beautiful story of love, healing, and forgiveness.”
— Abby Rice, The Briar Patch, Bangor, ME

Fans of Far from the Tree, We Are Okay and Emergency Contact will love this epic, utterly unforgettable contemporary novel about a lost shipwreck, a missing piece of family history, and weathering the storms of life.

The Larkin family isn't just lucky—they persevere. At least that's what Violet and her younger brother, Sam, were always told. When the Lyric sank off the coast of Maine, their great-great-great-grandmother didn't drown like the rest of the passengers. No, Fidelia swam to shore, fell in love, and founded Lyric, Maine, the town Violet and Sam returned to every summer. But wrecks seem to run in the family: Tall, funny, musical Violet can't stop partying with the wrong people. And, one beautiful summer day, brilliant, sensitive Sam attempts to take his own life.

Shipped back to Lyric while Sam is in treatment, Violet is haunted by her family's missing piece—the lost shipwreck she and Sam dreamed of discovering when they were children. Desperate to make amends, Violet embarks on a wildly ambitious mission: locate the Lyric, lain hidden in a watery grave for over a century. She finds a fellow wreck hunter in Liv Stone, an amateur local historian whose sparkling intelligence and guarded gray eyes make Violet ache in an exhilarating new way. Whether or not they find the Lyric, the journey Violet takes—and the bridges she builds along the way—may be the start of something like survival.

Epic, funny, and sweepingly romantic, The Last True Poets of the Sea is an astonishing debut about the strength it takes to swim up from a wreck.

Julia Drake grew up outside Philadelphia. As a teenager, she played some of Shakespeare's best heroines in her high school theater program, and their stories would stay with her forever. She received her BA in Spanish from Williams College, and her MFA in creative writing from Columbia University, where she also taught writing to first-year students. She currently works as a book coach for aspiring writers and teaches creative writing classes for Writopia, a nonprofit that fosters love of writing in young adults. She lives in San Francisco with her partner and their rescue rabbit, Ned.


"At once hilarious, insightful, and swashbuckling, Drake's debut is a lyrical adventure like no other."—David Arnold, New York Times best-selling author of Mosquitoland

"As warm and bright as a beach bonfire on a hazy summer night, The Last True Poets of the Sea will lift you up on a tide of love and lyricism, and carry you away, laughing and crying."—Jeff Zentner, Morris Award-winning author

"This story of a young woman coming to terms with herself and her family is so filled with virtues and heart that it is hard to know where to begin. It is at once tender and incisive, profound and page-turning, warm and beautifully written and very funny."—Madeline Miller, #1 New York Times best-selling author of Circe and Song of Achilles

*"Wry, quick-witted, and filled with deep grief and fathomless joy in equal measure, this is a triumphant debut. Echoes of Shakespeare's Twelfth Night and the barest touches of magical realism give shape to the story, which precisely and profoundly maps the ebbs and flows of surviving through trauma."—Booklist, starred review

*"A warm, wise, strange meditation on developing the strength to be vulnerable."—Kirkus Reviews, starred review

*"Drake has created an authentic and romantic tale, loosely based on Shakespeare's Twelfth Night, that shows that life can be embraced again even after enduring a tragedy."—School Library Journal, starred review

*"Violet emerges as a genuine, sympathetic protagonist struggling to create something new from the wreckage of her life."—Publishers Weekly, starred review

*"Drake's enthralling debut doesn't shy away from the big stuff. The Last True Poets of the Sea explores themes of identity, mental health, romance, and family with grace and gravitas."—BookPage, starred review