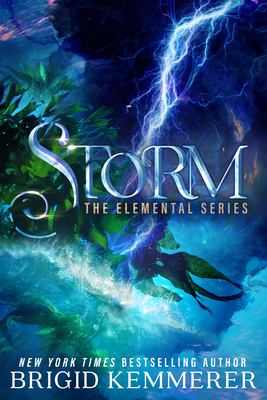 By Brigid Kemmerer
$16.95
Available to Order - Usually Arrives in Our Store in 4 to 7 Days

First in the Elemental series: "A refreshingly human paranormal romance" in which a girl stumbles into a world of adventure, danger, and romantic intrigue (Kirkus Reviews).

Thanks to her vindictive ex-boyfriend, Becca Chandler is suddenly getting attention from all the guys--and not the kind of attention she wants. Then she saves Chris Merrick from a fight in the school parking lot. He's a nice enough boy, even if he is a bit odd--he barely even fought back against his attackers.

But Becca soon discovers that Chris is no weakling. Chris is different. Way different: he can control water--just like his brothers can control fire, wind, and earth. They're powerful. Dangerous. And they have been marked for death. And now that she knows the truth, so is Becca.

But secrets are hard to keep when your life is at stake. So when Hunter, the mysterious new kid around school, proves to be a possible ally, Becca thinks she can trust him. But when Hunter goes head-to-head with Chris, Becca must uncover which one is hiding the most dangerous truth of all.

In this first book in the Elemental series, Brigid Kemmerer launches a thrilling new young adult series full of "magic, suspense, and enough twists to keep you reading until sunrise" (Erica O'Rourke).

Brigid Kemmerer finds time to write between her family and her day job, but sometimes she ends up mothering her coworkers and managing her family. You can follow her blog at www.brigidkemmerer.com.