The Name of the Wind (Kingkiller Chronicle #1) (Paperback) 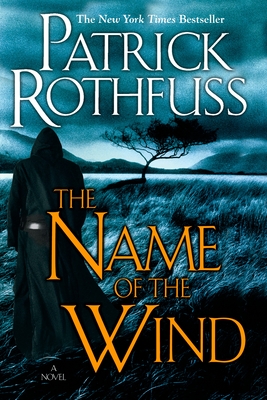 The Name of the Wind (Kingkiller Chronicle #1) (Paperback)

This is book number 1 in the Kingkiller Chronicle series.

This is one of the best fantasy books I’ve ever read! Anyone in need of an adventure will fall in love with Koth’s retelling of his childhood and teens as Kvothe. He must live up to the legend surrounding his name, and relive days he never expected to return to. Patrick Rothfuss has such an emotional and rhythmic prose that from the first chapter I was hooked and couldn’t put it down. -- Makayla R., Colfax Café Manager

“I just love the world of Patrick Rothfuss.” —Lin-Manuel Miranda

DAY ONE: THE NAME OF THE WIND

My name is Kvothe.

I have stolen princesses back from sleeping barrow kings. I burned down the town of Trebon. I have spent the night with Felurian and left with both my sanity and my life. I was expelled from the University at a younger age than most people are allowed in. I tread paths by moonlight that others fear to speak of during day. I have talked to Gods, loved women, and written songs that make the minstrels weep.

You may have heard of me.

So begins a tale unequaled in fantasy literature—the story of a hero told in his own voice. It is a tale of sorrow, a tale of survival, a tale of one man’s search for meaning in his universe, and how that search, and the indomitable will that drove it, gave birth to a legend.
Patrick Rothfuss is the bestselling author of The Kingkiller Chronicle. His first novel, The Name of the Wind, won the Quill Award and was a Publishers Weekly Best Book of the Year. Its sequel, The Wise Man’s Fear, debuted at #1 on The New York Times bestseller chart and won the David Gemmell Legend Award. His novels have appeared on NPR’s Top 100 Science Fiction/Fantasy Books list and Locus’ Best 21st Century Fantasy Novels list. Pat lives in Wisconsin, where he brews mead, builds box forts with his children, and runs Worldbuilders, a book-centered charity that has raised more than six million dollars for Heifer International. He can be found at patrickrothfuss.com and on Twitter at @patrickrothfuss.

Praise for The Kingkiller Chronicle

“Rothfuss’ Kingkiller books are among the most read and re-read in our home. It’s a world you want to spend lifetimes in, as his many fans will attest.” —Lin-Manuel Miranda, Pulitzer Prize-winning creator of Hamilton

“Rothfuss has real talent, and his tale of Kvothe is deep and intricate and wondrous.” —Terry Brooks, New York Times-bestselling author of Shannara

"It is a rare and great pleasure to find a fantasist writing...with true music in the words." —Ursula K. LeGuin, award-winning author of Earthsea

"The characters are real and the magic is true.” —Robin Hobb, New York Times-bestselling author of Assassin’s Apprentice

"Masterful.... There is a beauty to Pat's writing that defies description." —Brandon Sanderson, New York Times-bestselling author of Mistborn

“[Makes] you think he's inventing the genre, instead of reinventing it.” —Lev Grossman, New York Times-bestselling author of The Magicians

“This is a magnificent book.” —Anne McCaffrey, award-winning author of the Dragonriders of Pern

“The great new fantasy writer we've been waiting for, and this is an astonishing book." —Orson Scott Card, New York Times-bestselling author of Ender’s Game

“It's not the fantasy trappings (as wonderful as they are) that make this novel so good, but what the author has to say about true, common things, about ambition and failure, art, love, and loss.” —Tad Williams, New York Times-bestselling author of Memory, Sorrow, and Thorn

“An extremely immersive story set in a flawlessly constructed world and told extremely well.” —Jo Walton, award-winning author of Among Others

“Fans of the epic high fantasies of George R.R. Martin or J.R.R. Tolkien will definitely want to check out Patrick Rothfuss' The Name of the Wind.” —NPR

“Shelve The Name of the Wind beside The Lord of the Rings...and look forward to the day when it's mentioned in the same breath, perhaps as first among equals.” —The A.V. Club

“Rothfuss (who has already been compared to the likes of Terry Goodkind, Robert Jordan, and George R. R. Martin) is poised to be crowned the new king of epic fantasy.” —Barnes & Noble

“I was reminded of Ursula K. Le Guin, George R. R. Martin, and J. R. R. Tolkien, but never felt that Rothfuss was imitating anyone.” —The London Times

“This breathtakingly epic story is heartrending in its intimacy and masterful in its narrative essence.” —Publishers Weekly (starred)

“Reminiscent in scope of Robert Jordan's Wheel of Time series...this masterpiece of storytelling will appeal to lovers of fantasy on a grand scale.” —Library Journal (starred)