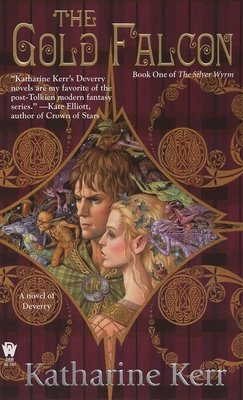 This is book number 1 in the Deverry: Silver Wyrm series.

Orphaned by a cholera epidemic, Neb and his young brother are sent to the desolate farm of their last living relative. But when the savage Horsekin tribes begin raiding the villages along Deverry's western border, the brothers must flee for their lives. A chance encounter with Salamander-a bard and master of dweomer magic-proves their salvation, as he brings them to the shelter of Tieryn Cadryc's dun. Here Neb finds love with his soulmate Branna only to be dragged into a war for the very survival of the kingdom. And though both Neb and Branna are gifted with dweomer magic, they are also facing powerful enemies they have fought before in past lives they no longer remember.
Katharine Kerr first became involved in the field of fantasy through role-playing games, becoming so intrigued that she began writing articles for gaming magazines, and for some time was a contributing editor to Dragon magazine. This interest soon led her into the field of fantasy writing, with her first Deverry novel, Daggerspell, appearing in 1986. Since then, she has written fourteen more Deverry novels, of which The Silver Mage is the latest, as well as other fantasy and science fiction novels. Her Deverry novels have hit the London Times and the Australian bestseller lists.