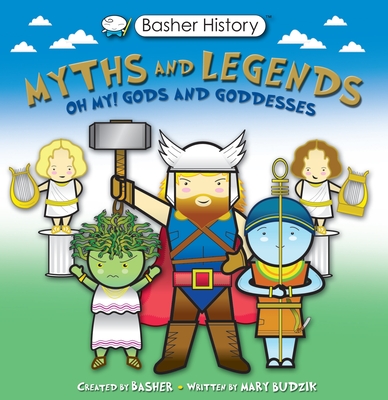 Why did Athena give her father a headache? What job did Odin’s pet ravens do? What happened when Osiris went to pieces in the desert?

Basher History: Myths and Legends is your chance to meet the immortal superstars of myth and legend. It’s time to get heroic: rub shoulders with gods, goddesses, and heroes from ancient Greece and Rome, Norse mythology, and ancient Egypt. Meet Zeus, father of the Greek gods; Norse Freyja, goddess of love, beauty, war, and death; and Egyptian Bastet, goddess of cats, along with many many others.

A spread about Roman gods provides a handy key to the relationship between Greek gods and their Roman equivalents, so you'll never get confused! For fans of mythical creatures, also check out Basher History: Legendary Creatures and the rest of the Basher History series.

Artist and designer Simon Basher has fun playing in the world of contemporary character design. Inspired by a love of simple line work and a rich color palette, his characters fill the gap between edgy manga and the cuteness of Hello Kitty. He lives in England.