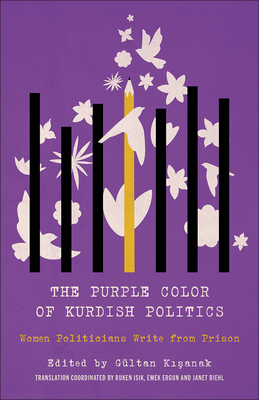 
Coming Soon - Available for Pre-Order Now
Gültan Kışanak, a Kurdish journalist and former MP, was elected co-mayor of Diyarbakır in 2014. Two years later, the Turkish state arrested and imprisoned her. Her story is remarkable, but not unique. While behind bars, she wrote about her own experiences and collected similar accounts from other Kurdish women, all co-chairs, co-mayors, and MPs in Turkey; all incarcerated on political grounds.

The Purple Colour of Kurdish Politics is a one-of-a-kind collection of prison writings from twenty-two Kurdish women politicians. Here they reflect on their personal and collective struggles against patriarchy and anti-Kurdish repression in Turkey; on the radical feminist principles and practices through which they transformed the political structures and state offices in which they operated. They discuss what worked and what didn’t, and the ways in which Turkey’s anti-capitalist and socialist movements closely informed their political stances and practices.

Demonstrating Kurdish women’s ceaseless political determination and refusal to be silenced – even when behind bars – the book ultimately hopes to inspire women living under even the most unjust conditions to engage in collective resistance.
Gültan Kisanak is editor of The Purple Colour of Kurdish Politics (2022). A longtime journalist, politician and anticolonial feminist activist for Kurdish liberation, she was elected to Parliament in 2007 as the MP from Diyarbakir. In 2014, she was elected co-mayor of Diyarbakir, after running as a candidate of the pro-Kurdish Democratic Regions Party (DBP). In 2016 she was arrested and charged with 'being a member of an armed illegal organisation', for which she was sentenced to 14 years and three months' imprisonment.

Ruken Isik is a PhD candidate at the University of Maryland, Baltimore County, researching Kurdish feminist resistance. She also works as a journalist and translator at Voice of America's Kurdish news service.

Emek Ergun is an Assistant Professor of Women's and Gender Studies and Global Studies at the University of North Carolina and author of Virgin Crossing Borders: Feminist Resistance and Solidarity in Translation.

Janet Biehl is a writer, editor and translator. She was Murray Bookchin's collaborator for the last two decades of his professional life. Her most recent work is Ecology or Catastrophe: The Life of Murray Bookchin (2015, Oxford University Press) and she recently translated Revolution in Rojava (Pluto, 2016).