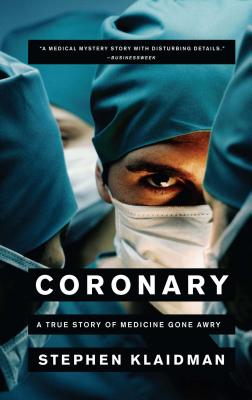 
Available to Order - Usually Arrives in Our Store in 4 to 7 Days
A chilling real-life medical thriller, Coronary chronicles the story of two highly respected heart doctors who violated the most sacred principle of their profession: First, do no harm.

In the summer of 2002, fifty-five-year-old John Corapi, a Catholic priest with a colorful background, visited Dr. Chae Hyun Moon, a celebrated cardiologist in Redding, California. Corapi had been suffering from exhaustion and shortness of breath, and although a physical examination and a conventional stress test revealed nothing abnormal, Moon insisted that the calcium level in Corapi's coronary arteries called for a highly invasive diagnostic test: an angiogram. A chain-smoking Korean immigrant known for his gruff bedside manner, Moon performed the procedure briskly and immediately handed down a devastating diagnosis: "I'm sorry; there is nothing I can do for you. You need a triple bypass tomorrow morning." He then abruptly left the room.

Several hours later, however, Moon inexplicably decided the surgery could wait until Corapi returned from a previously scheduled cross-country trip. Unnerved by the dire diagnosis and also by Moon's inconsistent statements, Corapi sought other opinions. To his amazement, a second, third, and fourth doctor found that his heart was perfectly healthy. In fact, for a man his age, Corapi's arteries were remarkably free of disease.

Sensing a cause more disturbing than human error, Corapi took his story to the FBI. As local agent Mike Skeen soon discovered, Corapi was one of a number of people who had suspicions about Moon and Moon's go-to cardiac surgeon, Dr. Fidel Realyvasquez, an equally respected member of the close-knit northern California community. Working at a hospital owned by Tenet Healthcare, Moon would make the diagnoses and Realyvasquez would perform the surgeries. Together, these leaders of the Redding medical establishment put hundreds of healthy people at risk, some of whom never recovered. Soon Skeen launched a major investigation, interviewing numerous doctors and patients, and forty federal agents raided the hospital where the doctors worked.

A timely and provocative dissection of America's medical-industrial complex, Coronary lays bare the financial structures that drive the American healthcare system, and which precipitated Moon's and Realyvasquez's actions. In a scheme that placed the demands of Wall Street above the lives of its patients, Tenet Healthcare rewarded doctors based on how much revenue they generated for the corporation.

A meticulous three-year FBI investigation and hundreds of civil suits culminated in no criminal charges but a series of settlements with Tenet Healthcare and the doctors that totaled more than $450 million and likely put an end to Moon's and Realyvasquez's medical careers. The case's every twist and turn is documented here.

A riveting, character-rich narrative and a masterpiece of long-form journalism, Coronary is as powerful as it is alarming. This is a hair-raising story of the hundreds of men and women who went under the knife, not in the name of medicine, but of profit and prestige. Brilliantly told, Stephen Klaidman's Coronary is a cautionary tale in the age of miracle medicine, and a shocking reminder to always get a second opinion.
Stephen Klaidman is a former editor and reporter for The New York Times, The Washington Post, and The International Herald Tribune. He was a senior research fellow at the Kennedy Institute of Ethics and a senior research associate at the Institute for Health Policy Analysis, Georgetown University. He is also the author of Saving the Heart: The Battle to Conquer Coronary Disease, Health in the Headlines, and The Virtuous Journalist (with Tom Beauchamp). He lives in Bethesda, Maryland.