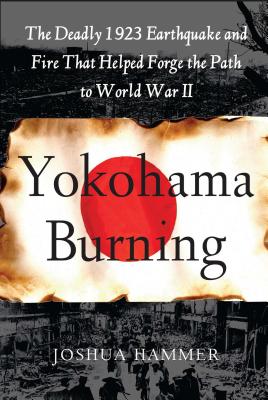 
Available to Order - Usually Arrives in Our Store in 4 to 7 Days
Yokohama Burning is the story of the worst natural disaster of the twentieth century: the earthquakes, fires, and tsunamis of September 1923 that destroyed Yokohama and most of Tokyo and killed 140,000 people during two days of horror.

With cinematic vividness and from multiple perspectives, acclaimed Newsweek correspondent Joshua Hammer re-creates harrowing scenes of death, escape, and rescue. He also places the tumultuous events in the context of history and demonstrates how they set Japan on a path to even greater tragedy.

At two minutes to noon on Saturday, September 1, 1923, life in the two cities was humming along at its usual pace. An international merchant fleet, an early harbinger of globalization, floated in Yokohama harbor and loaded tea and silk on the docks. More than three thousand rickshaws worked the streets of the port. Diplomats, sailors, spies, traders, and other expatriates lunched at the Grand Hotel on Yokohama's Bund and prowled the dockside quarter known as Bloodtown. Eighteen miles north, in Tokyo, the young Prince Regent, Hirohito, was meeting in his palace with his advisers, and the noted American anthropologist Frederick Starr was hard at work in his hotel room on a book about Mount Fuji. Then, in a mighty shake of the earth, the world as they knew it ended.

When the temblor struck, poorly constructed buildings fell instantly, crushing to death thousands of people or pinning them in the wreckage. Minutes later, a great wall of water washed over coastal resort towns, inundating people without warning. Chemicals exploded, charcoal braziers overturned, neighborhoods of flimsy wooden houses went up in flames. With water mains broken, fire brigades could only look on helplessly as the inferno spread.

Joshua Hammer searched diaries, letters, and newspaper accounts and conducted interviews with nonagenarian survivors to piece together a minute-by-minute account of the catastrophe. But the author offers more than a disaster narrative. He details the emerging study of seismology, the nascent wireless communications network that alerted the world, and the massive, American-led relief effort that seemed to promise a bright new era in U.S.-Japanese relations.

Hammer shows that the calamity led in fact to a hardening of racist attitudes in both Japan and the United States, and drove Japan, then a fledgling democracy, into the hands of radical militarists with imperial ambitions. He argues persuasively that the forces that ripped through the archipelago on September 1, 1923, would reverberate, traumatically, for decades to come.

Yokohama Burning, a story of national tragedy and individual heroism, combines a dramatic narrative and historical perspective that will linger with the reader for a long time.
Joshua Hammer is the New York Times bestselling author of The Bad-Ass Librarians of Timbuktu. He has written for The New York Times Magazine, GQ, Smithsonian, The Atlantic, The New Yorker, National Geographic, and Outside. He lives in Berlin.