The Battle for Augusta National: Hootie, Martha, and the Masters of the Universe (Paperback) 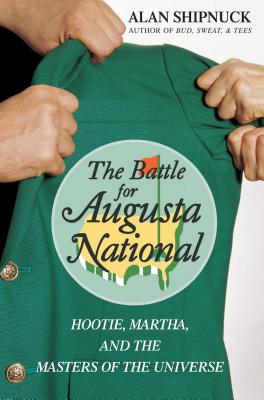 The Battle for Augusta National: Hootie, Martha, and the Masters of the Universe (Paperback)


Available to Order - Usually Arrives in Our Store in 4 to 7 Days
The controversy began with a seemingly innocuous private letter, and spiraled into the biggest media event in golf history. The Augusta National membership dispute dominated headlines and watercooler conversation for nearly a year, propelled by twenty-first-century hot-button issues and a pair of perfectly drawn foils in Hootie Johnson and Martha Burk. But a year after Burk's messy Masters week protest, the meaning of the membership controversy remains elusive. In The Battle for Augusta National, Alan Shipnuck -- who reinvented the PGA Tour narrative with the rollicking Bud, Sweat, & Tees -- provides the definitive account of what really happened and why.
In this lively, irreverent, ambitious book, Shipnuck chases the story from the chairman's office at Augusta National to the living room of the One Man Klan, along the way bringing to life a vivid cast of characters and revealing subplots aplenty. With meticulous reporting and penetrating insights, Shipnuck provides a nuanced look into the complex and contradictory worlds of Hootie and Martha, who were drawn together like moths to a flame; reveals Augusta National's secret plots to undermine the press and the accompanying turmoil at The New York Times, including an exclusive interview with the Times's disgraced executive editor, Howell Raines; and explores the Southern politics that led to Burk's Masters week banishment, drawing on Senate confirmation hearings and campaign contribution documents to link local politicians and a federal judge to Augusta National.
From Tiger Woods to Jack Welch, Sandra Day O'Connor to Bryant Gumbel, Treasury Secretary Snow to Jesse Jackson, the gang's all here in this withering look at a story that never stopped churning.
Along the way, many of the membership controversy's mysteries are revealed. How did Augusta National's top-secret membership roll become public? Who was the shadowy protester identified by hoodwinked reporters as Heywood Jablome? Did Burk lie about a vast right-wing conspiracy to undermine her demonstration? All of this and much more can be found in The Battle for Augusta National, a book that captures the passion and absurdity of a great national debate that continues to simmer.
Alan Shipnuck wrote his first cover story for Sports Illustrated in 1994 as a twenty-one-year-old intern, and in the ensuing quarter-century he typed two dozen more. He is the author of eight books, including the national bestsellers Bud, Sweat & Tees and The Swinger (with Michael Bamberger). Shipnuck has received twelve first-place awards in the annual writing contest conducted by the Golf Writers Association of America, breaking the record of Dan Jenkins, a member of the World Golf Hall of Fame. He is a partner at the golf media company the Fire Pit Collective, where all of his writing, podcasts, and video storytelling can now be found. Shipnuck lives in Carmel, California.