When Nothing Else Matters: Michael Jordan's Last Comeback (Paperback) 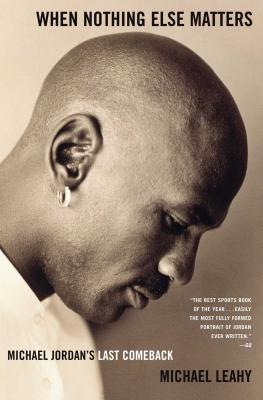 When Nothing Else Matters: Michael Jordan's Last Comeback (Paperback)


Available to Order - Usually Arrives in Our Store in 4 to 7 Days
As one of the greatest, most celebrated athletes in history, Michael Jordan conquered professional basketball as no one had before.

As one of the greatest, most celebrated athletes in history, Michael Jordan conquered professional basketball as no one had before. Powered by a potent mix of charisma, nearly superhuman abilities, and a ferocious need to dominate the game, he won six NBA championships with the Chicago Bulls and captured every basketball award and accolade conceivable before retiring and taking a top executive post with the Washington Wizards. But retirement didn't suit the man who was once king, and at the advanced age of thirty-eight Michael Jordan set out to reclaim the court that had been his dominion. When Nothing Else Matters is the definitive account of Jordan's equally spectacular and disastrous return to basketball. Washington Post writer Michael Leahy reveals the striking contrast between the public Jordan and the man whose personal style alienated teammates and the Washington owner who ousted him.
Michael Leahy is a staff writer for The Washington Post and The Washington Post Magazine. The recipient of numerous awards for journalistic excellence, Leahy has been honored with the selection of his stories for the 2001, 2002, 2003, and 2004 editions of The Best American Sports Writing anthologies. He lives outside Washington, D.C.
"The best sports book of the year...easily the most fully formed portrait of Jordan ever written."
-- GQ

"Michael Leahy has written a heck of a book....Mr. Leahy combines an unrelenting eye for detail with extraordinary big-picture analysis."
-- Jon Ward, The Washington Times

"When Nothing Else Matters gives us the best look we are likely to have of Jordan in decline...The result is a richly detailed, anecdote-driven account of one of the most famous men in the world approaching the end of his rope."
-- Ron Rapoport, Chicago Sun-Times