A Bed for the Night: Humanitarianism in Crisis (Paperback) 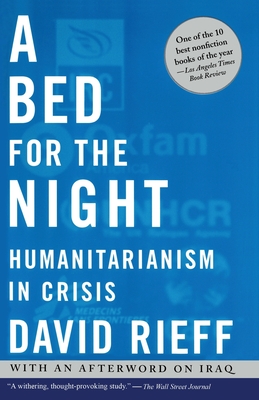 A Bed for the Night: Humanitarianism in Crisis (Paperback)


Available to Order - Usually Arrives in Our Store in 4 to 7 Days
Timely and controversial, A Bed for the Night reveals how humanitarian organizations are often betrayed and misused, and have increasingly lost sight of their purpose. Drawing on firsthand reporting from war zones around the world, David Rieff shows us what aid workers do in the field and the growing gap between their noble ambitions and their actual capabilities for alleviating suffering. He describes how many humanitarian organizations have moved from their founding principle of neutrality, which gave them access to victims, to encouraging the international community to take action to stop civil wars and ethnic cleansing. By calling for intervention, humanitarian organizations risk being seen as taking sides in a conflict and thus jeopardizing their access to victims. And by overreaching, the humanitarian movement has allowed itself to be hijacked by the major powers. Rieff concludes that if humanitarian organizations are to do what they do best -- alleviate suffering -- they must reclaim their independence.
David Rieff is the author of eight previous books, including Swimming in a Sea of Death, At the Point of a Gun: Democratic Dreams and Armed Intervention; A Bed for the Night: Humanitarianism in Crisis; and Slaughterhouse: Bosnia and the Failure of the West. He lives in New York City.

Los Angeles Times Book Review One of the 10 best nonfiction books of the year.

Nadine Gordimer A wake-up, shake-up for those of us who see unquestionable humanitarianism as the disinterested answer to conflict and poverty in our millennium world.

Brian Urquhart former Undersecretary General of the United Nations A Bed for the Night provides an excellent antidote to the hollow clichés and generalizations that often blur and distort the horribly real problems of helping the world's most afflicted people.