Bud, Sweat, & Tees: Rich Beem's Walk on the Wild Side of the PGA Tour (Paperback) 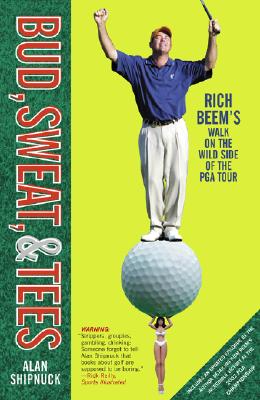 Bud, Sweat, & Tees: Rich Beem's Walk on the Wild Side of the PGA Tour (Paperback)


Available to Order - Usually Arrives in Our Store in 4 to 7 Days
Rich Beem became an overnight folk hero with his victory at the 2002 PGA Championship, where he dazzled fans with fearless shotmaking and glib one-liners. By the time Beem had stared down Tiger Woods in an epic back nine and then danced a goofy jig on the final green, the sports world was clamoring to know, “Who is this guy, anyway?”

That question is answered in Bud, Sweat, & Tees, Alan Shipnuck's no-holds-barred look at modern professional golf. Shipnuck began tracking Beem during his rookie year in 1999, when he was a logo-free rube only a couple of years removed from a seven-dollar-an-hour job hawking cell phones. Beem and his hard-living caddie, Steve Duplantis, would find sudden fame and fortune, and Shipnuck enjoyed unparalleled access in chronicling their wild ride—sharing endless drives across the desert and eventful nights at strip clubs, cutthroat golf matches and late-night confessionals at assorted watering holes.

The result is an intimate portrait of two exceedingly colorful characters. Beem and Duplantis invite us deep into the world of the PGA Tour, exposing the rowdy, randy reality of the most interesting subculture in sports, which has always been a well-protected secret—until now. Sometimes bawdy, often hilarious, and always unpredictable, Bud, Sweat, & Tees stands as the finest insider sports book since Ball Four.
Alan Shipnuck wrote his first cover story for Sports Illustrated in 1994 as a twenty-one-year-old intern, and in the ensuing quarter-century he typed two dozen more. He is the author of eight books, including the national bestsellers Bud, Sweat & Tees and The Swinger (with Michael Bamberger). Shipnuck has received twelve first-place awards in the annual writing contest conducted by the Golf Writers Association of America, breaking the record of Dan Jenkins, a member of the World Golf Hall of Fame. He is a partner at the golf media company the Fire Pit Collective, where all of his writing, podcasts, and video storytelling can now be found. Shipnuck lives in Carmel, California.

David Feherty CBS Sports and Golf Magazine Bud, Sweat, & Tees tells the stories I only wish we could tell on TV. And thank God Alan Shipnuck wrote them all down, because on the basis of what he's told us, I don't think Rich Beem and Steve Duplantis would remember them.