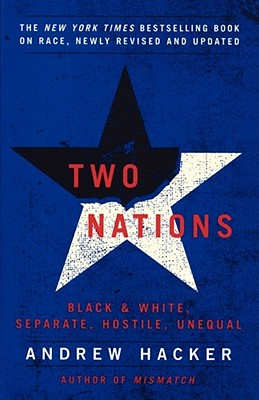 
Available to Order - Usually Arrives in Our Store in 4 to 7 Days
In this groundbreaking study, Andrew Hacker offers a fresh and disturbing examination of the divisions of color and class in present-day America, analyzing the conditions that keep black and white Americans dangerously far apart in their ability to achieve the American dream.

Why, despite continued efforts to increase understanding and expand opportunities, do black and white Americans still lead separate lives, continually marked by tension and hostility? In his much-lauded classic and updated version reflecting the changing realities of race in our nation, Andrew Hacker explains the origins and meaning of racism and clarifies the conflicting theories of equality and inferiority. He paints a stark picture of racial inequality in America—focusing on family life, education, income, and employment—and explores the controversies over politics, crime, and the causes of the gap between the races.

Reasoned, accurate, and devastating, Two Nations demonstrates how this great and dividing issue has defined America's history and the pivotal role it will play in the future.
Andrew Hacker is a professor of political science at Queens College in New York City. His books include Downfall: The Demise of a President and His Party, Two Nations, Higher Education?, and The Math Myth. He is a frequent contributor to The New York Review of Books, Time, and Fortune, among other periodicals. Mr. Hacker lives in New York City.

The Wall Street Journal A telling portrait of American life.... The numbers are stark and irrefutable.

The Boston Globe Devastating....We are left with the crushing effect of what we have done to ourselves by using race as our defining tool and lying most of the time about what we are doing.

The New York Times Book Review Challenging....The real value of this book is in Mr. Hacker's calm, analytical eye [and] his unblinking view of American history.

Claude Brown Author of Manchild in the Promised Land Provocatively enlightening....Probably the most candid book on present-day American racism.