I and Thou (Hardcover) 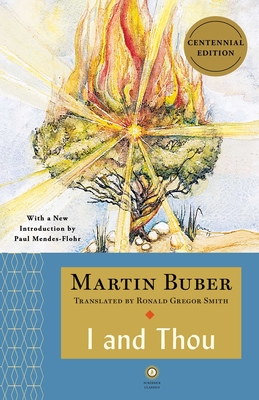 I and Thou (Hardcover)


Available to Order - Usually Arrives in Our Store in 4 to 7 Days
A centennial edition of I and Thou, a landmark of 20th-century intellectual history and one of the most important books of Western theology and philosophy, featuring the original English translation.

Considered to be one of the most important books of Western theology since its original publication in 1923, Martin Buber’s slender volume I and Thou influenced the way theologians, philosophers, and laymen think about the meaning of the relationship between human life and God. Heavily influenced by the writings of Friedrich Nietzsche, Buber unites the proto-existentialist currents of modern German thought with the Judeo-Christian tradition, powerfully updating faith for modern times.

I and Thou is Martin Buber’s seminal work and the centerpiece of his groundbreaking philosophy. In it, Buber—one of the greatest Jewish minds of the twentieth century—lays out a view of the world in which human beings can enter into relationships using their innermost and whole being to form true partnerships (an I–Thou attitude). These deep forms of rapport contrast with those that sprang from the Industrial Revolution, namely the treatment of others as objects for our use (an I–It attitude). Buber goes on to demonstrate how these interhuman meetings are a reflection of the human meeting with God. For Buber, the essence of biblical religion consists in the fact that—regardless of the infinite abyss between them—a dialogue between man and God is possible.

This original English translation by Ronald Gregor Smith was prepared in the author’s presence and is considered to be the definitive edition of the book.
Martin Buber (1878–1965) was a prolific author, scholar, literary translator, and political activist whose writings—mostly in German and Hebrew—ranged from Jewish mysticism to social philosophy, biblical studies, religious phenomenology, philosophical anthropology, education, politics, and art. Upon his emigration from Nazi Germany to Palestine in 1938, he assumed a professorship in social philosophy at the Hebrew University of Jerusalem. Until his death in Jerusalem, he was an unflagging advocate on Arab-Jewish fraternity and rapprochement. Buber was recurrently nominated for a Nobel Prize in literature and in Peace.