In the Footsteps of Marco Polo (Paperback) 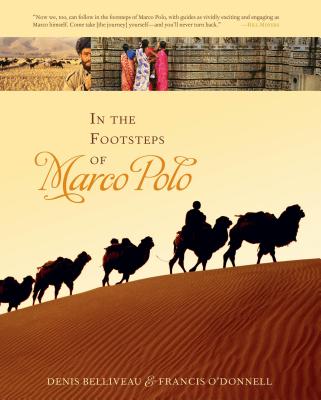 By Denis Belliveau, Francis O'Donnell
Please email or write store for pricing and availability information.
Special Request - May Not Be Available

Did Marco Polo reach China? This richly illustrated companion volume to the public television film chronicles the remarkable two-year expedition of explorers Denis Belliveau and Francis O'Donnell as they sought the answer to this controversial 700-year-old question. With Polo's book, The Travels of Marco Polo, as their guide, they journeyed over 25,000 miles becoming the first to retrace his entire path by land and sea without resorting to helicopters or airplanes. Surviving deadly skirmishes and capture in Afghanistan, they were the first Westerners in a generation to cross its ancient forgotten passageway to China, the Wakhan Corridor. Their camel caravan on the southern Silk Road encountered the deadly singing sands of the Taklamakan and Gobi deserts. In Sumatra, where Polo was stranded waiting for trade winds, they lived with the Mentawai tribes, whose culture has remained unchanged since the Bronze Age. They became among the first Americans granted visas to enter Iran, where Polo fulfilled an important mission for Kublai Khan. Accompanied by 200 stunning full-color photographs, the text provides a fascinating account of the lands and peoples the two hardy adventurers encountered during their perilous journey. The authors' experiences are remarkably similar to descriptions from Polo's account of his own travels and life. Laden with adventure, humor, diplomacy, history, and art, this book is compelling proof that travel is the enemy of bigotry--a truth that resonates from Marco Polo's time to our own.

Denis Belliveau's award-winning photographic career has taken him to more than seventy countries. He is the founder and CEO of the Foundation for Historical Exploration and lives in New York City. Francis O'Donnell is a freelance sculptor, writer, and lecturer who is a long-time resident of New York and New Jersey.