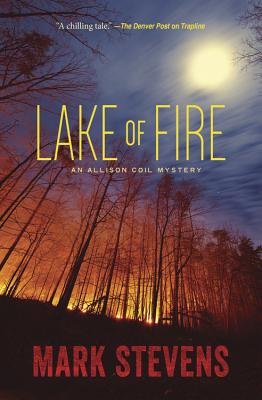 A giant wildfire is roaring through Colorado's Flat Tops Wilderness. The massive blaze is wiping out Allison Coil's precious hunting grounds, and the flames have set their sights on the beautiful ranch owned by her boyfriend's family.

Allison and longtime friend Trudy are shocked to learn that a body has been found in the fire ravaged forest--a friend who was a reclusive environmentalist with an unorthodox idea for the battle against global warming. Along with reporter Duncan Bloom, Allison burrows into an underground group of anti-government extremists. As they strike close to home and hurt those closest to her, Allison vows hell might not be punishment enough for this cabal of sinister fanatics.

Lake of Fire swirls into an environmental inferno that reads all too true--Mark Stevens writes like wildfire.--Craig Johnson, author of The Walt Longmire Novels, basis for the hit series Longmire

Mark Stevens is at the top of his game.--Margaret Coil, New York Times bestselling author of The Wind River Mysteries

Mark Stevens is one heckuva storyteller, and Lake of Fire is a riveting page-turner of the highest order.--Scott Graham, National Outdoor Book Award-winning author Dark Waters and the bestselling Birdwatcher's Mystery Series

And most of all, you'll root for the smartest, coolest heroine this side of the Mississippi: Allison Coil. Try not to tear the pages as you turn them furiously.--James W. Ziskin, atuhor of Stone Cold Dead and The Ellie Stone Mystery Series

Mark Stevens (Denver, CO) worked as a reporter for The Christian Science Monitor, The Rocky Mountain News, The MacNeil/Lehrer NewsHour, The Denver Post, and Denver Public Schools. He is a member of the Mystery Writers of America, Sisters in Crime, Rocky Mountain Fiction Writers, and the Colorado Authors League.