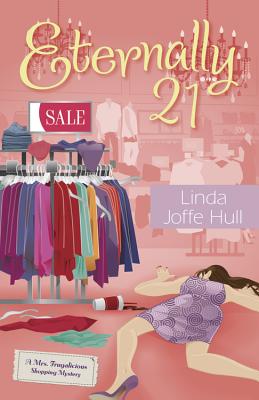 Coupon-clipping Mrs. Frugalicious gets more than she bargained for

After Mr. Frank "Finance" Michaels loses the family's financial nest egg in a Ponzi scheme, his wife Maddie does whatever she can to help keep up the appearance that everything is financially fine. When she starts a bargain hunter's blog under the alias Mrs. Frugalicious, her website becomes a viral hit with a growing "frugarmy" of budget advice seekers.

While Maddie is researching "frugasm"-worthy deals on holiday shopping for teens, Eternally 21 store manager Laila DeSimone mistakenly accuses her of shoplifting. Then her day goes from bad to worse when Laila expires on the floor. Since Laila was a universally disliked manager, the murder suspect list is longer than Maddie's bargain spreadsheet. But when evidence points to Maddie as the prime suspect, she must track down the real culprit. Can she uncover the truth before police throw away her get-out-of-jail-free coupon for good?

"A character whom readers will be pleased to follow."--Publishers Weekly

"Maddie's coupon-clipping tips are seamlessly incorporated into the well-constructed mystery, which provides a series of stunning twists that will leave readers eager to see what will happen to Maddie in the next installment."--Booklist

"Never has coupon clipping been so fun or harrowing. Fast-paced, entertaining and filled with twist and turns, Eternally 21 will save mystery readers money and make them lose sleep as they cheer for formerly wealthy turned frugally funny Maddie Michaels. With colorful characters and an engaging heroine, this series debut will leave cozy readers clamoring for more."--Joelle Charbonneau, author of The Rebecca Robbins and Glee Club Mysteries

Linda Joffe Hull (Denver, CO) is a member of Mystery Writers of America, Sisters in Crime, and Rocky Mountain Fiction Writers, where she has served in a variety of positions, including President, Treasurer, and Conference Chair. Visit her online at LindaJoffeHull.com.