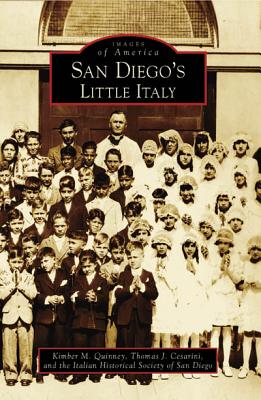 
Title unavailable, please email for information.
Italian immigrants settled along San Diego's waterfront in the early 1900s and formed the Italian Colony, a tightly knit community that provided refuge, shared culture, and heritage. Extended families, new businesses, and church traditions formed the foundation for a lasting social code. It was no coincidence that the area would become known as Little Italy it was exactly that for its inhabitants a home away from their native land. But by the mid-1960s, changes brought by
war and urban modernization began to unravel the community. Take a compelling journey through this unique immigrant enclave. Vivid images and descriptive captions highlight essential elements of this community, such as labor and longing, fishing and family, ritual and revitalization. Through photographs contributed by local community members, this volume traces the evolution of a humble fishing village into the chic urban neighborhood that is Little Italy today.