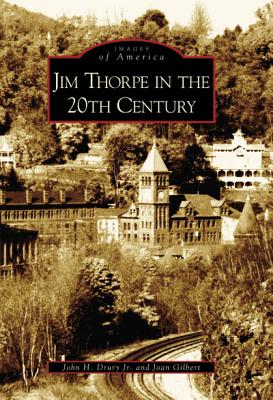 By John H. Drury Jr, Joan Gilbert
$21.99
Special Request - May Not Be Available

Mauch Chunk (Bear Mountain) was a boomtown gone bust by the mid 1900s, and came up with a unique way to change its fortunes via Olympian Jim Thorpe.

Jim Thorpe in the 20th Century examines the causes and effects of a community's decision to relinquish its Native American name Mauch Chunk ("Bear Mountain") to become the town of Jim Thorpe. In the 19th century, Mauch Chunk rode a wave of prosperity, as coal shipping and tourism turned ordinary men into millionaires. In the 20th century, the mainstays of the town's economy began to tumble like dominoes: mule-drawn coal boats could not compete with the iron horse, ending Mauch Chunk's days as a canal town by 1922; the touristattracting Switchback Gravity Railroad, unable to afford parts, closed in 1932; the coal mines and working railroads collapsed, as industry, home heating, and trucking turned to petroleum. Down-and-out by the mid-1900s, Mauch Chunk was looking for a means of saving itself when the widow of 1912 Olympian Jim Thorpe proposed a stranger-than-fiction solution.