Catch 22: My Battles, in Hockey and Life (Hardcover) 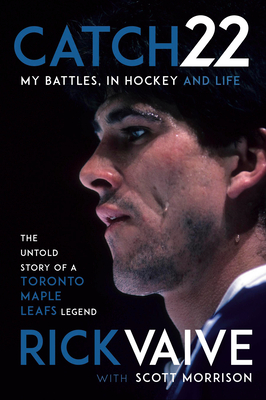 By Rick Vaive, Scott Morrison
Please email or write store for pricing and availability information.
Special Request - May Not Be Available

Was one of the most unheralded captains of the Toronto Maple Leafs also one of the greatest players in the history of hockey's most popular team? In telling his story of turmoil in Toronto's Ballard years (and with Don Cherry's Mississauga Ice Dogs), growing up in an environment filled with alcohol and alcoholism, and his own struggles and battles, Rick Vaive finally sets the record straight.

In the storied history of the Toronto Maple Leafs, no player scored fifty goals in a season until Rick Vaive in 1981-82. He did it three years in a row (only two others have scored 50 since) before being unceremoniously stripped of his captaincy and traded out of town, and he did it for a promising team that was nonetheless largely stuck at the bottom of the standings. So why isn't his number 22 hanging from the rafters of the Leafs' rink and his name as revered in Leafs lore as Gilmour, Sundin and Clark?

You could blame it on a team that lost far more than it won. You could blame Harold Ballard and his erratic ownership. You could blame the fans, the media...Rick Vaive doesn't blame anybody. Sometimes, life just doesn't go your way. He'd know. Growing up in a household plagued by alcoholism, the gifted young hockey player took shelter in the company of his grandmother and a blind and severely disabled uncle. Rick learned quickly that there are more valuable things in life than hockey. Even after his promising coaching career stopped dead when it ran into Don Cherry in Mississauga--one of the worst seasons in Ontario junior hockey history--he still doesn't point fingers. Life is too sweet for regrets, but learning that lesson can be one hell of a ride.

RICK VAIVE is a retired professional hockey player. Born in Ottawa and raised in Charlottetown, he played in the NHL from 1979-92, for the Vancouver Canucks, Toronto Maple Leafs, Chicago Blackhawks and Buffalo Sabres. As captain of the Maple Leafs from 1982-86, he scored more than fifty goals in three consecutive seasons, making him the first player in team history to achieve that mark and the only one to do it more than once. He coached seven seasons in the minor professional leagues and one in the Ontario Hockey League, winning a championship with the expansion South Carolina Stingrays in 1997. He continues today as an ambassador for the Toronto Maple Leafs and NHL.
SCOTT MORRISON has provided cogent and colourful hockey analysis since his start in 1979, covering the Maple Leafs and NHL for the Toronto Sun. Having reported and provided analysis for Sportsnet and CBC Television and Radio, while making regular appearances across the sports-radio dial, he brings a trusted and measured voice to the hockey-media landscape, twice serving as president of the Professional Hockey Writers' Association. He has written numerous books, including 100 Years, 100 Moments: A Centennial of NHL Hockey. In 2006, he received the Hockey Hall of Fame's Elmer Ferguson Memorial Award. He lives in Toronto.

“Hockey players tend to pull their punches in their autobiographies, and sometimes try to make themselves look better than they were. Not Vaive. This book is raw and real. The stories of his family, his battle with alcoholism, even the feelings that his career might be over before it even really started, show a genuine interest in telling the reader what things were really like to be Rick Vaive. Morrison is a great storyteller, having covered Vaive and the Maple Leafs through the 1980s when he was with the Toronto Sun. As a result, there are some fun media memories, too.” —Kevin McGran, Toronto Star