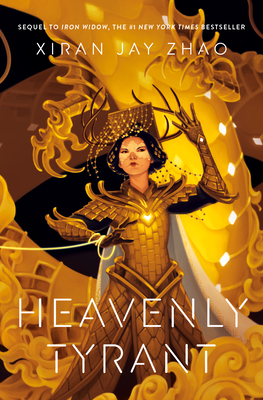 This is book number 2 in the Iron Widow series.

Zetian must balance dangerous politics with a new quest for vengeance in the sequel to the #1 New York Times bestseller Iron Widow, a blend of Chinese history and mecha science fiction.

After suffering devastating loss and making drastic decisions, Zetian finds herself at the seat of power in Huaxia. But she has also learned that her world is not as it seems, and revelations about an enemy more daunting than Zetian imagined forces her to share power with a dangerous man she cannot simply depose. Despite having vastly different ideas about how they must deconstruct the corrupt and misogynist system that plagues their country, Zetian must join this man in a dance of truth and lies and perform their roles to perfection in order to take down their common enemy, who seeks to control them as puppets while dangling one of Zetian’s loved ones as a hostage.

With political unrest and perilous forces aiming to undermine Zetian at every turn, can she enact positive changes as a fair and just ruler? Or will she be forced to rely on fear and violence and succumb to her darker instincts in her quest for vengeance? Find out in this highly-anticipated sequel to Iron Widow, a #1 New York Times bestseller!
XIRAN JAY ZHAO is a first-generation immigrant from small-town China who was raised by the Internet. A recent graduate of Vancouver's Simon Fraser University, they wrote science fiction and fantasy while they probably should have been studying more about biochemical pathways. You can find them on Twitter for memes, Instagram for cosplays and fancy outfits, and YouTube for long videos about Chinese history and culture. This is their second novel, after the runaway success Iron Widow.