We the North: 25 Years of the Toronto Raptors (Hardcover) 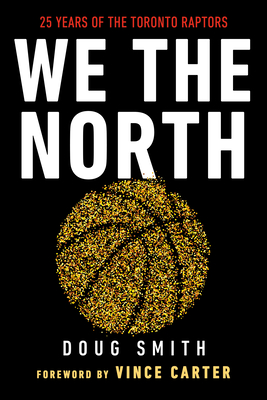 By Doug Smith, Vince Carter (Foreword by)
$25.00
On Our Shelves Now

"Doug Smith always gets the first question in any Raptors press conference--as the dean of our press corps, he's been in the front row for every development over the past 25 years. There's no one better placed to write a history of our team's first quarter century."
--Nick Nurse, head coach, Toronto Raptors

Bringing Jurassic Park to your home, a celebration of Canada's most exciting team.

When the Toronto Raptors first took the court back in 1995, the world was a very different place. Michael Jordan was tearing up the NBA. No one had email. And a lot of people wondered whether basketball could survive in Toronto, the holy city of hockey.

More than two decades later, the Raptors are the heroes not only of the 416, but of the entire country. That is the incredible story of We the North, told by Doug Smith, the Toronto Star reporter who has been covering the team since the press conference announcing Canada's new franchise and the team's beat reporter from that day on.

Comprising twenty-five chapters to mark the team's first twenty-five years, We the North celebrates the biggest moments--from Vince Carter's amazing display at the dunk competition to the play-off runs, the major trades, the Raptors' incredible fans, including Nav Bhatia and Drake, and, of course, the challenges that marked the route to the championship-clinching Game 6 that brought the whole country to a standstill.

We the North: 25 Years of the Toronto Raptors tells the story of Canada's most exciting team, charting their rise from a sporting oddity in a hockey-mad country to the status they hold today as the reigning NBA champions and national heroes.

DOUG SMITH is a sports reporter for the Toronto Star and has covered the Raptors since their inception in 1995. He is recognized throughout the NBA as the expert on all things Raptors, and spent five years serving as the first and only non-American president of the Professional Basketball Writers Association, a group of more than 200 men and women who regularly cover the league and its teams. His international basketball experience includes major assignments at the1992 FIBA Tournament Of The Americas (which was the debut of the United States Dream Team), the 1992 Barcelona, 1996 Atlanta, 2000 Sydney, 2004 Athens, 2008 Beijing, 2012 London and 2016 Rio Olympics, as well as men's world championships in Toronto, Indianapolis, Athens and Izmir and Istanbul, Turkey.

Praise for We the North:

“Doug Smith always gets the first question in any Raptors press conference—as the dean of our press corps, he’s been in the front row for every development over the past 25 years. There’s no one better placed to write a history of our team’s first quarter century.”
—Nick Nurse, head coach, Toronto Raptors

“Very rarely in the business of professional sports a coach and sports writer can become friends! Doug is that rare person, because of his integrity and his reputation for the truth. I didn't always agree with him, but I never thought or felt his opinions were personal. As a professional coach that's all you can ask for. Doug was that writer. I have the utmost respect for him as a writer and a man.”
—Sam Mitchell, former head coach, Toronto Raptors

“There’s no better person to write a book on the Raptors than Doug! He’s seen the high and lows of the organization in every way! I look forward to reading this tremendous masterpiece!”
—Damon Stoudamire, first Raptors draft pick

“If anyone in Toronto can say they’ve seen it all and been [with the Raptors] every step of the way it’s Doug Smith.”
—Breakfast Television, CityTV

“If you’re a basketball fan, this book will be a slam dunk. . . . We the North takes readers on a twenty-five-year journey from the birth of the Raptors franchise all the way to its championship season in 2019. Smith recounts all the big moments and key players that helped transform this team from the relative obscurity of its early days into one of Canada’s most successful and popular teams.”
—Everything Zoomer

“An apt and loving take on a team that has built its own identity and represents the city of Toronto better than any other major sports entity, despite a comparative lack of history and tradition. That the Raptors had to fight the entire way, while being overlooked and underestimated on both sides of the border, just makes this story that much more rewarding.”
—Quill & Quire