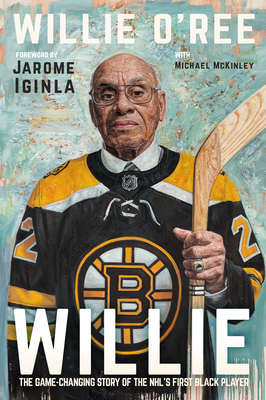 By Willie O'Ree, Michael McKinley, Jarome Iginla (Foreword by)
$26.00
On Our Shelves Now

An inspiring memoir that shows that anyone can achieve their dreams if they are willing to fight for them.

In 1958, Willie O'Ree was a lot like any other player toiling in the minors. He was good. Good enough to have been signed by the Boston Bruins. Just not quite good enough to play in the NHL.

Until January 18 of that year. O'Ree was finally called up, and when he stepped out onto the ice against the Montreal Canadiens, not only did he fulfil the childhood dream he shared with so many other Canadian kids, he did something that had never been done before.

He broke hockey's colour barrier. Just as his hero, Jackie Robinson, had done for baseball.

In that pioneering first NHL game, O'Ree proved that no one could stop him from being a hockey player. But he soon learned that he could never be just a hockey player. He would always be a black player, with all that entails. There were ugly name-calling and stick-swinging incidents, and nights when the Bruins had to be escorted to their bus by the police.

But O'Ree never backed down. When he retired in 1979, he had played hundreds of games as a pro, and scored hundreds of goals, his boyhood dreams more than accomplished.

In 2018, O'Ree was inducted into the Hockey Hall of Fame in recognition not only of that legacy, but of the way he has built on it in the decades since. He has been, for twenty years now, an NHL Executive and has helped the NHL Diversity program expose more than 40,000 boys and girls of diverse backgrounds to unique hockey experiences.

Inspiring, frank, and shot through with the kind of understated courage and decency required to change the world, Willie is a story for anyone willing to persevere for a dream.

In 2005, WILLIE O'REE received the Order of New Brunswick, the highest honour of the Province of New Brunswick. In 2008, O'Ree was named to the Order of Canada, and the Fredericton, New Brunswick City Council named their new hockey arena after him in honour of his accomplishments. In 2018, the NHL established the Willie O'Ree Community Hero Award in his honour. The award recognizes those who, like O'Ree, have used hockey to "build character, teach life skills and foster positive values." In November 2018, O'Ree was inducted into the Hockey Hall of Fame. He remains a pubic figure with an extensive network across North America.

“For every single kid who was ever told to ‘stick to basketball,’ Willie was like the first man on the moon. He wasn’t just a hockey player. He was an astronaut.”
—Wayne Simmonds, player, Buffalo Sabres

“Now, more than ever, is the right time for Willie O’Ree to tell his story in full. Having played in the league in the footsteps of guys like Tony McKegney, Val James, Bill Riley, and Mike Marson, I know that if you don't have someone who leads the way, maybe you don't look in that direction. Kids need to know that they can do anything, and no one shows that better than Willie.”
—Grant Fuhr, five-time Stanley Cup winner and member of the Hockey Hall of Fame

“Willie O’Ree stood for something more than just being a black hockey player who broke the colour barrier. He represents that no matter what colour you are, what race, or what gender, you could do anything if you believe in yourself. Willie raised the glass ceiling for the entire sport and the ripple effect of his accomplishments are still felt today.”
—PK Subban, Norris Trophy winner, NHL All-Star, and philanthropist

“[Willie] is a fascinating read that sheds light on the long and difficult journey that led to O’Ree’s short but impactful run in the world’s best hockey.”
—Toronto Star