This Land: How Cowboys, Capitalism, and Corruption are Ruining the American West (Hardcover) 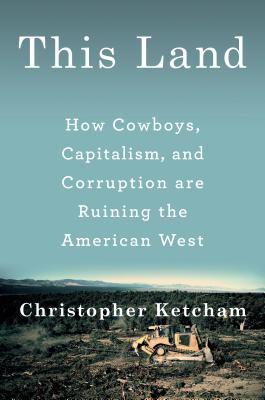 This Land: How Cowboys, Capitalism, and Corruption are Ruining the American West (Hardcover)


Title unavailable, please email for information.
“A big, bold book about public lands . . . The Desert Solitaire of our time.” —Outside

The public lands of the western United States comprise some 450 million acres of grassland, steppe land, canyons, forests, and mountains. It's an American commons, and it is under assault as never before.

Journalist Christopher Ketcham has been documenting the confluence of commercial exploitation and governmental misconduct in this region for over a decade. His revelatory book takes the reader on a journey across these last wild places, to see how capitalism is killing our great commons. Ketcham begins in Utah, revealing the environmental destruction caused by unregulated public lands livestock grazing, and exposing rampant malfeasance in the federal land management agencies, who have been compromised by the profit-driven livestock and energy interests they are supposed to regulate. He then turns to the broad effects of those corrupt politics on wildlife. He tracks the Department of Interior's failure to implement and enforce the Endangered Species Act--including its stark betrayal of protections for the grizzly bear and the sage grouse--and investigates the destructive behavior of U.S. Wildlife Services in their shocking mass slaughter of animals that threaten the livestock industry. Along the way, Ketcham talks with ecologists, biologists, botanists, former government employees, whistleblowers, grassroots environmentalists and other citizens who are fighting to protect the public domain for future generations.

This Land is a colorful muckraking journey--part Edward Abbey, part Upton Sinclair--exposing the rot in American politics that is rapidly leading to the sell-out of our national heritage. The book ends with Ketcham's vision of ecological restoration for the American West: freeing the trampled, denuded ecosystems from the effects of grazing, enforcing the laws already in place to defend biodiversity, allowing the native species of the West to recover under a fully implemented Endangered Species Act, and establishing vast stretches of public land where there will be no development at all, not even for recreation.
Christopher Ketcham has written for dozens of publications, including Harper's, National Geographic, and The New Republic. He has reported from the American West for more than a decade. This book is a product of those years in the last wild places. He currently lives in the Catskill Mountains of New York.

Praise for This Land:

"Ketcham’s important book is an urgent cry to expose the greed, stubbornness and neglect that is harming public lands . . . he has written a psalm to nature and a manifesto to stop the forces that are threatening a territory that stretches from Colorado to the Pacific Coast." —Los Angeles Times

"A rollicking and unsparing look at the threats to our public lands . . . part reportage, part history, part backcountry travelogue, the book is full of righteous anger and reverence for wild spaces . . . brings the fighting spirit and conservation vision of great writers like Edward Abbey, Rachel Carson, and Bernard DeVoto into the 21st century." —Outside

"Ketcham is a muckraking activist . . . his brutally clear reporting supports his view . . . This Land is a catalog of depredations wrought by grazers, drillers, miners, loggers and the holders of public office who abet them, betraying their duty to the public trust in favor of money and political power . . . [Ketcham’s] book is ultimately a call to arms." —The New York Times Book Review

"Ferocious . . . [a] stunning book . . . What makes This Land so pressing and so painful is that it drains any reservoirs of political naïveté you may have left. It reminds us that myths . . . are the collective lies we tell ourselves to keep from seeing what is actually happening . . . This Land is a book that will help us tell the story truthfully, a book for the hard times now that are a prelude to harder times ahead." —Verlyn Klinkenborg, The American Scholar

"A searing account of the use and abuse of America’s public lands . . . an eye-opener in the tradition of Rachel Carson’s Silent Spring." —The Denver Post

"This Land is a striking cry of anguish . . . Chronicling a history of subjugation beginning 200 years ago, the book offers infuriating evidence of a broken system leading to a broken ecosystem." —Salt Lake City Weekly

"This book minces no words on how environmental deterioration has created a situation that will make our descendants wonder what corporations were thinking about besides making money." —Roundup Magazine

"As Christopher Ketcham says so eloquently in these pages, the vast public lands are perhaps America's greatest legacy, a landscape of the scale necessary to help preserve the diversity of life on a hot planet in a tough century. That's why we need to pay such attention to the stories he tells of the threats they face." —Bill McKibben, author of Falter: Has the Human Game Begun to Play Itself Out?

"Christopher Ketcham is a marvelously fresh and forceful voice, one unaffected by the squishy language and languid resistance of our grotesquely compromised (and well-funded) environmental organizations. Instructive and swiftly, smartly written, this book about the pillage and poisoning of our public lands reinvigorates writing as a force for outrage and change at the same time as it returns us to the clear-headed, big-hearted zeal of classic environmental works." —Joy Williams, author of The Florida Keys

"As potent in its way as Silent Spring. This book will open your eyes to the greed and abuse destroying our public lands. Better yet, it will make you angry." —T. C. Boyle, author of Outside Looking In

"[A]n impressive book debut . . . Echoing writers such as Bernard DeVoto, Edward Abbey, and Aldo Leopold, Ketcham underscores the crucial importance of diverse, wild ecosystems and urges ‘a campaign for public lands that is vital, fierce, impassioned, occasionally dangerous, without hypocrisy, that stands against the tyranny of money.’ Angry, eloquent, and urgent—required reading for anyone who cares about the Earth." —Kirkus (starred review)

"At a time when our politics couldn’t be more superficial, shallow, and ephemeral, here is a war cry for the profound, deep, and long lasting. In this country, our public lands have always defined us, and the original vision for those lands was revolutionary. With This Land, Christopher Ketcham helps us see that vision anew, and offers us an equally revolutionary picture of our public lands as large, connected, healthy, cow-less, car-less (and sometimes people-less), and as perhaps our last hope in a warming world steeped in the politics of despair. In the thoughtful but rowdy tradition of Bernard DeVoto and Edward Abbey, with a dash of John Wesley Powell and Wallace Stegner thrown in, Ketcham reminds us that while the way we have treated our public lands has been criminal, we can find salvation, for them and for ourselves, in their restoration. I would challenge anyone to read this inspiring book and not be stirred to fight for this land." —David Gessner, author of All the Wild That Remains: Edward Abbey, Wallace Stegner and the American West

"Brutally honest accounts about politicians are rarely welcomed by their subjects. Christopher Ketcham’s book about contemporary conflicts over public lands in the western United States is such a book. If I were an official of the U.S. Bureau of Land Management, the U.S. Department of Agriculture, or if I were associated with the livestock industry in the West, I'm sure that I would pay many hundreds of thousands of dollars to have it suppressed." —Michael Soulé, professor emeritus of environmental studies, University of California, Santa Cruz

"This Land is the book we've all been waiting for. It is simultaneously profound and incisive, breathtaking and heartbreaking, inspiring and sobering. Most of all it is imbued with a love of the land: the land we all love, the land we need, the land that needs us now more than ever. This book is desperately and wildly important." —Derrick Jensen, author of The Myth of Human Supremacy

"This may be the most important book about the American West since Edward Abbey’s Desert Solitaire and, like Abbey before him, Ketcham refuses to go down without a fight. This Land is a Code Red alert for what’s left of the West, an urgent howl to join him on the frontlines of the only war that really matters: the war against life on Earth. Nearly every page burns with a ferocious rage at the mutilation of the landscape that shaped the American character." —Jeffrey St. Clair, editor-in-chief of CounterPunch

"America’s patchwork system of public lands—nearly all in the West—is a socialist anomaly in the heart of the capitalist beast, and one of the wonders of the world. But those lands and their irreplaceable animal and plant life face unrelenting threat from the forces of rapine and pillage. Christopher Ketcham lays bare those many threats in pissed-off, funny, loving, deeply informed prose. He calls for nothing more or less than a people’s war in defense of what remains, and he makes a superb case for the fight." —Jeff Nichols, author of Prostitution, Polygamy, and Power: Salt Lake City, 1847-1918

"A full-force, book-length investigation of the forces destroying protections for public lands and wildlife, not just in the West but throughout the entire country. Illuminating and disturbing." —EcoWatch, "The 13 Best Environmental Books of July"