The Highwayman: A Longmire Story (A Longmire Mystery) (Hardcover) 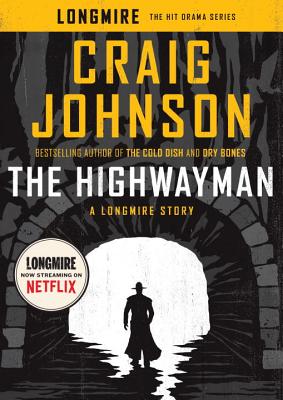 By Craig Johnson
Please email or write store for pricing and availability information.
Hard to Find

Craig Johnson's new novel, The Western Star, will be available from Viking in Fall 2017.

When Wyoming highway patrolman Rosey Wayman is transferred to the beautiful and imposing landscape of the Wind River Canyon, an area the troopers refer to as no-man's-land because of the lack of radio communication, she starts receiving “officer needs assistance” calls. The problem? They're coming from Bobby Womack, a legendary Arapaho patrolman who met a fiery death in the canyon almost a half-century ago. With an investigation that spans this world and the next, Sheriff Walt Longmire and Henry Standing Bear take on a case that pits them against a legend: The Highwayman.

Craig Johnson is the New York Times bestselling author of the Longmire mysteries, the basis for the hit Netflix original series Longmire. He is the recipient of the Western Writers of America Spur Award for fiction, the Mountains and Plains Booksellers Award for fiction, the Nouvel Observateur Prix du Roman Noir, and the Prix SNCF du Polar. His novella Spirit of Steamboat was the first One Book Wyoming selection. He lives in Ucross, Wyoming, population twenty-five.

“You don’t have to be a fan of Longmire, the hit Netflix series, to appreciate this clever tale.” —Publishers Weekly

"This ghost story is a great tale with enough twists and turns to make it a fun read. A reader new to the series can dive into the Longmire world immediately and will likely want to go back and read all of its previous entries."
—Deseret News

"Just a pure story that would be right at home being told around a campfire: immediately engaging, filled with turns and surprises, with an ending that comes too soon."—The Gazette

"An especially good tale . . . If you are not familiar with Longmire, you might want to meet him. If you know him, don't miss his latest case." —Charleston Post & Courier

"The [Longmire] series continues to be fresh and innovative. . . . Devoted series fans won't feel a sense of déjà vu in Dry Bones, but they will easily identify Johnson's tendency toward innovative imagery . . . crack dialogue, humor and a strong sense of place. Absaroka's maker brings dem bones to life, and readers are sure to rejoice." —Shelf Awareness

Praise for Craig Johnson and the Walt Longmire Mystery Series

"It's the scenery—and the big guy standing in front of the scenery—that keeps us coming back to Craig Johnson's lean and leathery mysteries." —The New York Times Book Review

"Johnson's hero only gets better—both at solving cases and at hooking readers—with age." —Publishers Weekly

"Like the greatest crime novelists, Johnson is a student of human nature. Walt Longmire is strong but fallible, a man whose devil-may-care stoicism masks a heightened sensitivity to the horrors he's witnessed." —Los Angeles Times

"Johnson's trademarks [are] great characters, witty banter, serious sleuthing, and a love of Wyoming bigger than a stack of derelict cars." —The Boston Globe

"The characters talk straight from the hip and the Wyoming landscape is its own kind of eloquence." —The New York Times

"[Walt Longmire] is an easy man to like. . . . Johnson evokes the rugged landscape with reverential prose, lending a heady atmosphere to his story." —The Philadelphia Inquirer

"Stepping into Walt's world is like slipping on a favorite pair of slippers, and it's where those slippers lead that provides a thrill. Johnson pens a series that should become a 'must' read, so curl up, get comfortable, and enjoy the ride." —The Denver Post

"Johnson's pacing is tight and his dialogue snaps." —Entertainment Weekly