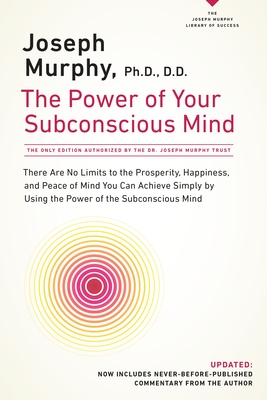 
Warehouse Out of Stock
The bestseller by a preeminent teacher of the New Thought movement, now revised and expanded with never-before- published commentary from the author.

One of the bestselling self-help books of all time, The Power of Your Subconscious Mind has helped millions around the world achieve remarkable goals, simply by changing the way they think.

Dr. Murphy's mind-focusing techniques are based on a simple principle: If you believe in something without reservation and picture it in your mind, you can remove the subconscious obstacles that prevent you from achieving the results you want, and your belief can become a reality.

As an advocate of what is now popularly known as the Law of Attraction, Murphy shows that anyone can unleash extraordinary mental powers to build self-confidence, to create harmonious relationships, to gain professional success, to amass wealth, to conquer fears and phobias, to banish bad habits, and even to effect physical healing and promote overall well-being and happiness.
A native of Ireland, Joseph Murphy (1898 — 1981) was a prolific and widely admired New Thought minister and writer, best known for his motivational classic, The Power of Your Subconscious Mind, an international bestseller since it first blazed onto the self-help scene. His pamphlet How to Attract Money first appeared in 1955, and likewise entered many editions. Murphy wrote widely on the auto-suggestive and metaphysical faculties of the human mind and is considered one of the pioneering voices of affirmative-thinking philosophy.