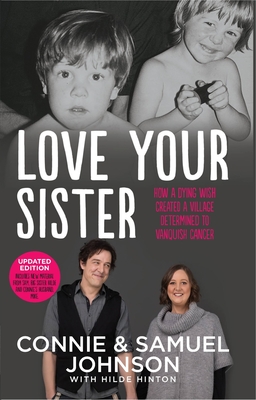 
Email or call for price. Handling fee may apply.
A searingly honest memoir of family and love, this is the unforgettable tale of two inspiring Australians - Connie and Samuel Johnson.

Connie had a love/hate relationship with cancer. She hated cancer but cancer loved her. It sought her out at twelve, again at twenty-two and then, at thirty-three, as a mother of two young boys, she was diagnosed with breast cancer and told she would die. In the shadow of that terminal diagnosis, Connie came up with an insane dare for her brother, actor Samuel Johnson, to unicycle around the entire country in an effort to remind every young mum in the land to be breast aware.

Who says no to a dying wish?

When Samuel said the inescapable 'yes', Love Your Sister was born. Sam became the world's most determined unicyclist, covering almost 16,000 kilometres in 364 days. What started as a promise to his dying sister turned into a pledge to everyone suffering from cancer. After his turn as Molly Meldrum in the biopic Molly, Samuel promptly retired from acting to focus solely on raising $10 million towards cancer vanquishment. So far Love Your Sister has raised over $7 million ...

Then, in September 2017, the woman who taught us all that every day is awesome took her last breath. But Connie always said 'It's not over when I die. It's over when mums stop dying from cancer'. So Sam, Em and the village aren't stopping.

In this updated edition of the bestselling memoir, Sam and big sister Hilde share stories of Connie, the birth of The Stick and the Big Heart Project and remind us all yet again just how far people can go for the ones they love.
Samuel and Connie Johnson are the powerhouse brother and sister team who established the LOVE YOUR SISTER charity.

Samuel is an Australian actor with 20 years experience, best-known for his work on THE SECRET LIFE OF US, CRACKERJACK, UNDERBELLY II and RUSH. In recent times he is more proud of his work as a breast cancer advocate and determined unicyclist. He was also Victorian of the Year for 2017.

Connie Johnson was a wife and mother of two beautiful young boys who worked in the disability sector for ten years. The proud recipient of a Member of the Order of Australia, she passed away in September 2017.