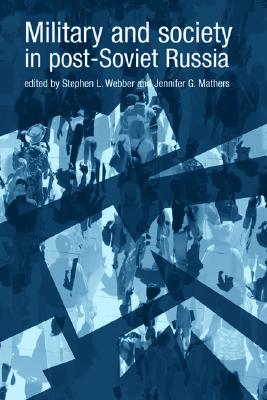 This collection provides the first comprehensive analysis of the nature of the relationship between the military and society in post-Soviet Russia. It brings together a multidisciplinary group of leading Western and Russian experts to investigate both the ways in which developments in the Russian armed forces influence Russian society, and the impact of broader societal change on the military sphere.

“Scholars and policymakers ignore the strategic importance of Russia’s armed forces at their peril. This volume provides an overview of the political and societal foundations of the Russian military, and offers sober predictions about the future relationship between citizen and soldier in the post-Soviet sphere.”--Professor Graham Allison, Kennedy School of Government, Harvard University
“The continuing crisis in the armed forces is a central element in Russia’s broader crisis of transition. Burdened by irrelevant doctrines, rusting weapons, shaky discipline, unhappy recruits, still resistant to outside scrutiny, uneasy about its place in society, Russia’s diminished army has far to go before it becomes the modern and efficient force the country needs. This substantial and wide-ranging collection shows why this is so, and also how things are – perhaps – slowly changing for the better.”--Sir Rodric Braithwaite, UK Ambassador to the Soviet Union / Russian Federation, 1988-92
“An indispensable work on the current status of the Russian military by the top experts in the world. A book that every specialist on civil–military relations and contemporary Russia should have in his or her library.”--Dale Herspring Kansas State University
“We have paid surprisingly little attention to the military in our analyses of post-Soviet Russia. This is a serious omission, because the army has been, and will be, a crucial factor in Russia’s political, social, and economic development. This book is very much to be welcomed for its comprehensive and incisive exploration of the relationship between the military and society, which is one of the keys to Russia’s future.”--David Holloway, Stanford University