This Book Is Feminist: An Intersectional Primer for Next-Gen Changemakers (Empower the Future #3) (Paperback) 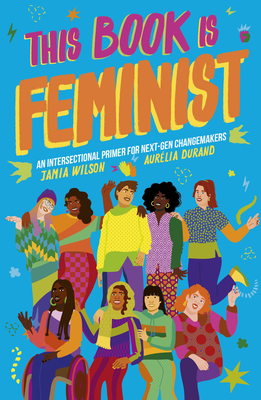 This Book Is Feminist: An Intersectional Primer for Next-Gen Changemakers (Empower the Future #3) (Paperback)


Available to Order - Usually Arrives in Our Store in 4 to 7 Days
A vibrantly illustrated introduction to intersectional feminism for next-generation changemakers, this book is a must-read guide for young people seeking to understand the world around them.

"Wilson’s optimistic view of feminism is based on the tenet of liberation for all, placing marginalized communities front and center... [A] foundational work." - NEW YORK TIMES

What have you been taught about who has power and who makes the rules? Have you ever been lost for words at an old-school family friend’s ‘kind’ but sexist comments? Do you agree with equality and strive for justice, but want to learn more? Then read on.

In this new feminist classic, the focus is intersectional from the beginning, not just as an add-on. Using the framework of ‘personal is political’, Jamia Wilson – former director of the Feminist Press – analyses her own experiences, before expanding outwards and drawing on stats as well as quotes from feminist firebrands and activists to inspire and encourage.

Bold illustrations underpin this title, and each chapter ends with a ‘Call To Action’ box to encourage readers to reflect on and embrace their own interpretation of feminism and to acknowledge the connection between race, class, gender, disability and economic justice.

Expand what feminism means to you, your community and society by examining these 15 themes: You will close the book with an understanding that history and culture play a role in shaping systems of power and of what we can do with our strengths, community and values to help change course when needed. You won’t have read a feminist tome like this before.

Also available in theEmpower the Future series isThis Book is Anti-Racist,a powerful guide to how to incorporate anti-racist action into your life. Other inspiring books authored by Jamia Wilson are Young Gifted and Black, Step Into Your Powerand Big Ideas for Young Thinkers.


Jamia Wilson joined Random House as an executive editor in 2021, and is the former executive director and publisher of the Feminist Press. An activist and writer, Wilson has contributed to New York Magazine, The New York Times, The Today Show, CNN, BBC, Teen Vogue, Elle, Refinery 29, Rookie, and The Guardian. She is the author of Young Gifted and Black; Baby Young, Gifted, and Black; Step Into Your Power; and Big Ideas for Young Thinkers. She is also a co-author of Road Map for Revolutionaries and wrote the introduction and oral history to Together We Rise: Behind the Scenes at the Protest Heard Around the World.

Aurélia Durand is a French graphic artist. Her work, which includes the illustrations for the #1 New York Times bestseller This Book Is Anti-Racist, is a vivid celebration of diversity; she dedicates her artistic voice to matters involving representation. Aurélia represents Afro-descendants as joyful, proud, and empowered — a united community whose destinies are intertwined. These colorful personalities present the unified voice of a global community whose hopes, dreams, and desires envision an inclusive future for all. Her work has been featured in advertising campaigns, galleries, and editorial magazines; her clients include Nike, The New Yorker, Facebook, and more. Find her on Instagram: @4ur3lia.

Jamia Wilson’s accessible primer, “This Book Is Feminist,” frames the movement as enlightened collective consciousness. Wilson...treats feminism as a living, breathing, malleable entity that holds the key to dismantling systemic oppression and injustice. For her, there is no feminism without intersectionality.—Vanessa Willoughby, The New York Times

Gorgeously illustrated… Pick up this gem for the budding feminists of all genders in your life who are joining—and reimagining—the fight against the patriarchy!—Ms. Magazine

“Drive[s] home the message that young people can be involved, and indeed—that 'the revolution will be youth innovated.'”—Publishers Weekly, starred review

In this companion to Tiffany Jewell’s This Book Is Anti-Racist (2020), Wilson takes on the controversial f-word: feminism. She notes up front that today’s feminist changemakers are quite different than their predecessors, welcoming among their ranks trans women and nonbinary individuals and spanning multiple intersections of identity. The author then approaches feminism through short, dense chapters that address such broad issues as justice, education equality, health, money, and power. Each chapter begins with quotes from notable living and historic feminists and ends with quick, relevant facts and guided questions to help readers develop their own identities, definition of feminism, and calls to action. In between, Wilson uses her experiences as a Black disabled woman to introduce concepts, intersectionality, and key individuals and events in feminist history, while some of her personal stories, such as attending boarding school and living abroad, offer an additional perspective. Once again, Durand contributes vibrant digital artwork, adding eye-catching visuals to this relevant resource, for which adult collaboration may help readers unpack difficult concepts.—Angela Leeper, Booklist

This Book Is Feminist is alive, engaging, comprehensive, and fun. I'm thrilled people of all ages will read this primer on the ways that forces of history and power shape our lives and the inspiring movements creating a better world. Wilson expertly connects systems and collectivism to the needs and dreams of the individual reader. I came away from it thankful, and proud to be a feminist.—Tavi Gevinson, actor, writer, and founder of Rookie Magazine