Translating Property: The Maxwell Land Grant and the Conflict Over Land in the American West, 1840-1900 (Paperback) 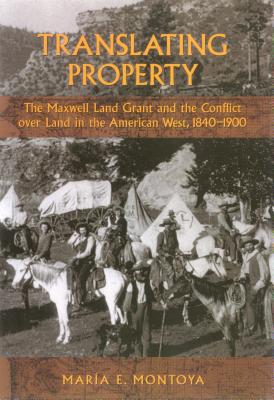 Translating Property: The Maxwell Land Grant and the Conflict Over Land in the American West, 1840-1900 (Paperback)


Available to Order - Usually Arrives in Our Store in 4 to 7 Days
When American settlers arrived in the southwestern borderlands, they assumed that the land was unencumbered by property claims. But, as Mar a Montoya shows, the Southwest was no empty quarter simply waiting to be parceled up. Although Anglo farmers claimed absolute rights under the Homestead Act, their claims were contested by Native Americans who had lived on the land for generations, Mexican magnates like Lucien Maxwell who controlled vast parcels under grants from Mexican governors, and foreign companies who thought they had purchased open land. The result was that the Southwest inevitably became a battleground between land regimes with radically different cultural concepts. The struggle over the Maxwell Land Grant, a 1.7-million-acre tract straddling New Mexico and Colorado, demonstrates how contending parties reinterpreted the meaning of property to uphold their claims to the land. Montoya reveals how those claims, with their deep historical and racial roots, have been addressed to the satisfaction of some and the bitter frustration of others. Translating Property describes how European and American investors effectively mistranslated prior property regimes into new rules that worked to their own advantage--and against those who had lived on the land previously. Montoya explores the legal, political, and cultural battles that swept across the Southwest as this land was drawn into world market systems. She shows that these legal issues still have real meaning for thousands of Mexican Americans who continue to fight for land granted to their families before the Treaty of Guadalupe Hidalgo, or for continuing communal access to land now claimed by others. This new edition of Montoya's book brings the land grant controversy up to date. A year after its original publication, the Colorado Supreme Court tried once more to translate Mexican property ideals into the U.S. system of legal rights; and in 2004 the Government Accounting Office issued the federal government's most comprehensive effort to sort out the tangled history of land rights, concluding that Congress was under no obligation to compensate heirs of land grants. Montoya recaps these recent developments, further expanding our understanding of the battles over property rights and the persistence of inequality in the Southwest.