A Hero Ain't Nothin' but a Sandwich (Mass Market) 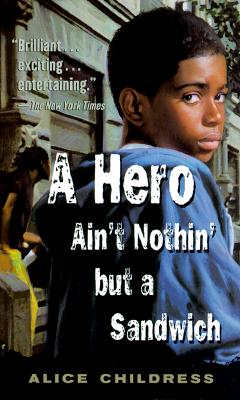 A Hero Ain't Nothin' but a Sandwich (Mass Market)


Available to Order - Usually Arrives in Our Store in 4 to 7 Days
Benjie can stop using heroin anytime he wants to. He just doesn't want to yet. Why would he want to give up something that makes him feel so good, so relaxed, so tuned-out? As Benjie sees it, there's nothing much to tune in for. School is a waste of time, and home life isn't much better. All Benjie wants is for someone to believe in him, for someone to believe that he's more than a thirteen-year-old junkie. Told from the perspectives of the people in his life-including his mother, stepfather, teachers, drug dealer, and best friend-this powerful story will draw you into Benjie's troubled world and force you to confront the uncertainty of his future.
Alice Childress (1916-1994) was born in Charleston, South Carolina and moved to Harlem when she was a young child. She began her career as an actress but soon turned to playwrighting. Her works include Trouble in Mind, Gold Through the Trees, Wedding Band: A Love/Hate Story in Black and White, and the young adult novel A Hero Ain’t Nothin’ but a Sandwich.