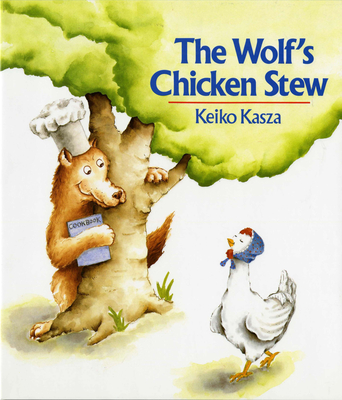 
Email or call for price. Handling fee may apply.
The wolf loves to eat more than anything in the world and one day he has a terrible craving for chicken stew. He spots a chicken who seems just right, but then he thinks how much more stew there will be if he fattens her up before dining himself. So he goes home and begins to cook all kinds of scrumptious food for the chicken to eat. A big surprise is in store for the wolf when he finally visits Mrs. Chicken to collect his meal.
Keiko Kasza was born on a small Japanese island in the Inland Sea of Japan. She grew up in a typical Japanese extended family with her parents, two brothers, and grandparents. Uncles, aunts, and cousins also lived nearby. "All the steps I took growing up were very normal," Ms. Kasza says. "The only unusual thing I did was go to college in the United States." She graduated with a degree in graphic design from California State University at Northridge. Ms. Kasza married an American, and the United States has been her home ever since.

After publishing five children's books in Japan and working as a graphic designer for fourteen years, Ms. Kasza decided in 1988 to devote her time to picture books. She says, "Having two small boys and two professions was too much to handle."

Ms. Kasza admires many great picture-book creators, such as Leo Lionni and Maurice Sendak, but says that the work of Arnold Lobel has influenced her the most. The subtle humor and warmth he created in his books continues to inspire me," she says. "I often go back to his work when I get discouraged or lose confidence."

Ms. Kasza compares the process of making a book to acting on stage under the lights:
"I become the character that I'm working on at that moment. I pretend that I'm a bird looking for a mother, or a pig trying to impress his girlfriend. When I'm acting, I'm a child myself."

Ms. Kasza's ambition is not to create a hundred books, but to "create one really good book that will be kept on the family bookshelves for generations, although a hundred really good books would be even better, of course!"

Keiko Kasza lives in Indiana with her husband and two sons.


Winner of the Kentucky Bluegrass Award

''The wolf is an endearing critter whose expressions run the gamut from sly to shy to downright lovable. A good option for story hours." --Booklist

"Children will enjoy both the wolfs scheming and his comeuppance. Deft watercolors convey the scheming wolf and the unflappable hen." --School Library Journal