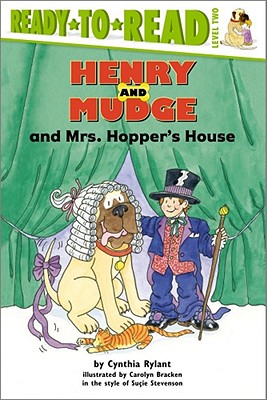 This is book number 22 in the Henry & Mudge series.

A Special Valentine's Day for Henry and Mudge
Henry's mother and father are going to a Valentine's Day Sweetheart Dance, and Henry and Mudge are staying with Mrs. Hopper across the street. Henry's never been in Mrs. Hopper's scary, old stone house with its droopy trees and dark windows and gargoyle on the door. But inside, Henry discovers a houseful of surprises -- a grand piano, a room full of costumes, and eleven cats for Mudge to play with!
Cynthia Rylant is the author of more than 100 books for young people, including the beloved Henry and Mudge, Annie and Snowball, Brownie & Pearl, Motor Mouse, and Mr. Putter & Tabby series. Her novel Missing May received the Newbery Medal. She lives in Portland, Oregon.