From the Mixed-Up Files of Mrs. Basil E. Frankweiler (Paperback) 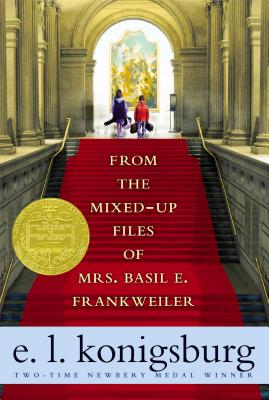 From the Mixed-Up Files of Mrs. Basil E. Frankweiler (Paperback)

Run away to the Metropolitan Museum of Art with E. L. Konigsburg’s beloved classic and Newbery Medal­–winning novel From the Mixed-Up Files of Mrs. Basil E. Frankweiler!

When Claudia decided to run away, she planned very carefully. She would be gone just long enough to teach her parents a lesson in Claudia appreciation. And she would go in comfort-she would live at the Metropolitan Museum of Art. She saved her money, and she invited her brother Jamie to go, mostly because be was a miser and would have money.

Claudia was a good organizer and Jamie bad some ideas, too; so the two took up residence at the museum right on schedule. But once the fun of settling in was over, Claudia had two unexpected problems: She felt just the same, and she wanted to feel different; and she found a statue at the Museum so beautiful she could not go home until she bad discovered its maker, a question that baffled the experts, too.

The former owner of the statue was Mrs. Basil E. Frankweiler. Without her—well, without her, Claudia might never have found a way to go home.
E.L. Konigsburg is the only author to have won the Newbery Medal and a Newbery Honor in the same year. In 1968, From the Mixed-Up Files of Mrs. Basil E. Frankweiler won the Newbery Medal and Jennifer, Hecate, Macbeth, William McKinley, and Me, Elizabeth was named a Newbery Honor Book. Almost thirty years later she won the Newbery Medal once again for The View from Saturday. Among her other acclaimed books are Silent to the Bone, The Outcasts of 19 Schuyler Place, and The Mysterious Edge of the Heroic World.