How Much Is a Million? (Paperback) 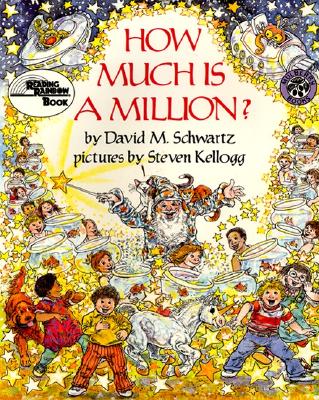 How Much Is a Million? (Paperback)

Ever wonder just what a million of something means? How about a billion? Or a trillion? Marvelosissimo the mathematical magician can teach you!

How Much Is a Million? knocks complex numbers down to size in a fun, humorous way, helping children conceptualize a difficult mathematical concept. It's a math class you'll never forget.

This classic picture book is an ALA Notable Book, a Reading Rainbow Feature Selection, and a Boston Globe/Horn Book Honor Book for Illustration.

The repackage of this fun look at math concepts includes a letter from the author that features several ways for children to find a million everyday things.

With the same energy, humor and clarity found in his 50 books, David wows audiences at schools around the United States and beyond. David is an accomplished storyteller and a master at getting kids to think and have fun at the same time. His presentations lead children on entertaining and educational journeys that combine math, science, reading and writing. David also gives keynote presentations and workshops for educators at professional conferences.

Steven Kellogg was "moved by the simplicity, the subtleties, and the poignance of the writing in this story." He welcomed the opportunity to reillustrate it in full color. Mr. Kellogg is an award-winning author and illustrator who has created more than 100 children's books, including The Three Little Pigs, Paul Bunyan, Johnny Appleseed, and Sally Ann Thunder Ann Whirlwind Crockett. He is the illustrator of Santa Claus Is Comin' to Town and The Baby Beebee Bird. Mr. Kellogg is a recipient of the David McCord Citation and the Regina Medal for his distinguished contribution to children's literature. He lives with his wife, Helen, in upstate New York.