The Making of the Masters: Clifford Roberts, Augusta National, and Golf's Most Prestigious Tournament (Paperback) 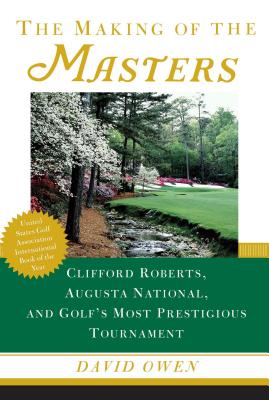 The Making of the Masters: Clifford Roberts, Augusta National, and Golf's Most Prestigious Tournament (Paperback)


Available to Order - Usually Arrives in Our Store in 4 to 7 Days
The Masters. For any golf fan, the words evoke the immortal greats of the game and their quest for the most prized trophy of all -- the green jacket of Augusta National Golf Club.
But behind the legendary links and timeless traditions is one of the most overlooked and misunderstood figures in the history of the Masters and Augusta National: Clifford Roberts, the club's chairman from its founding in 1931 until shortly before his death in 1977. Roberts' meticulous attention to detail, his firm authoritarian hand, and his refusal to settle -- even for perfection -- helped build the Masters into the tournament it is today, and Augusta National into every golfer's idea of heaven on earth.
David Owen was granted unprecedented access to the archives and records of Augusta National Golf Club. He has produced an honest and affectionate chronicle of the Masters, from its conception to its modern greatness, and a fascinating portrayal of Clifford Roberts -- whose perseverance and pride forged the Augusta National we know today.
David Owen plays in a weekly foursome, takes mulligans off the first tee, practices intermittently at best, wore a copper wristband because Steve Ballesteros said so, and struggles for consistency even though his swing is consistent -- just mediocre. He is a staff writer for The New Yorker, a contributing editor to Golf Digest, and a frequent contributor to The Atlantic Monthly. His other books include The First National Bank of Dad, The Chosen One, The Making of the Masters, and My Usual Game. He lives in Washington, Connecticut.

The Wall Street Journal Owen makes us wish we had known Roberts, if only to judge him for ourselves -- no small achievement. He writes beautifully...meandering through the familiar byways, enveloping us in the Augusta-ness of it all.