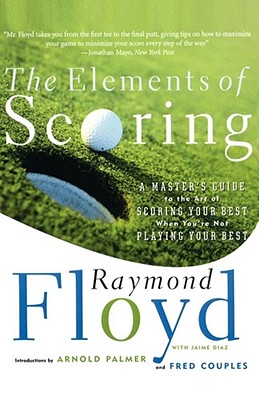 
Available to Order - Usually Arrives in Our Store in 4 to 7 Days
Say Good-Bye to Doubles and Triples Forever
Every aspect of golf, from the swing to the follow-through, is a means to one deceptively simple end: to get the ball into the hole in the fewest strokes possible. The Elements of Scoring explains how paying attention to the way you play -- regardless of your level of skill -- will guarantee you fewer strokes, a better overall game, and at the end of the day, more fun.
With a practical and encouraging touch, Raymond Floyd shares his vision of what makes a scorer and shows how you can become this most dangerous of opponents.
Golf is a game of mistakes: The secret to better golf lies in making fewer of them and making sure the ones you do make don?t prove too costly. With Raymond Floyd as your teacher, you are sure to shoot the lowest scores you can, day in and day out, playing the game like a true scorer.
Raymond Floyd has won 35 official gold tournaments (22 on the regular tour, 13 on the senior tour), including four majors. He made history in 1992 when he became the first player to win on both the PGA Tour and the Senior Tour in the same year. He lives in Palm Beach, Florida.

Jamie Diaz is a senior writer for Sports Illustrated. He lives in Temecula, California.

Arnold Palmer is one of the most storied and successful golfers to have ever played the game. He won the Masters Tournament four times, in 1958, 1960, 1962 and 1964 and the U.S. Open in spectacular fashion in 1960 at Cherry Hills Country Club in Denver, coming back from seven strokes down in the final round. Palmer also won the British Open in 1961 and 1962. Among the majors, only the PGA Championship has eluded him -- he finished second three times. He was also Ryder Cup captain in 1963. Arnold Palmer divides his time between Latrobe, a small industrial town in Western Pennsylvania where he was born, and Florida. He is the author of a number of practical golf guides, as well as the bestselling autobiography, A GOLFER'S LIFE.
Jonathan Mayo New York Post Mr. Floyd takes you from the first tee to the final putt, giving tips on how to maximize your game to minimize your score every step of the way.