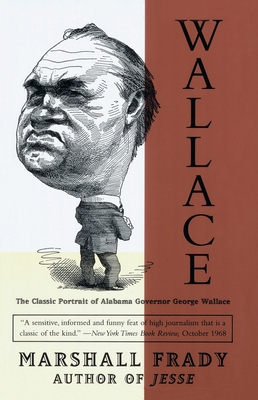 
Available to Order - Usually Arrives in Our Store in 4 to 7 Days
“A sensitive, informed and funny feat of high journalism that is a classic of the kind.”—The New York Times Book Review

Wallace is a classic portrait of one of the century’s most fiery and controversial political figures. Initially conceived as a novel, Marshall Frady’s biography of George Wallace retains the narrative force and descriptive powers of fiction. Elizabeth Hardwick noted on Wallace’s first publication in 1968, “There is a palpable Faulknerian mood to the reporting,” and The New Republic observed, “Frady has established new standards in political biography.” This is a wonderfully crafted depiction of a seminal figure whose influence altered the course of national politics.
A native South Carolinian, Marshall Frady has been a journalist for more than 25 years, writing principally on political figures and racial and social tensions in the American culture, first as a correspondent for Newsweek, then for Life, Harper's, Esquire, The New York Review of Books, The Sunday Times (London), The Atlantic Monthly, and most recently The New Yorker. In the 1980s, he was chief writer and correspondent for ABC News Closeup and a correspondent for Nightline. He is the author of the acclaimed biographies Wallace and Billy Graham: A Parable of American Righteousness.