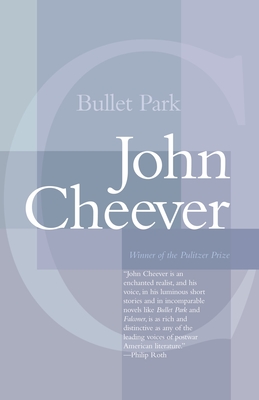 
Available to Order - Usually Arrives in Our Store in 4 to 7 Days
Welcome to Bullet Park, a township in which even the most buttoned-down gentry sometimes manage to terrify themselves simply by looking in the mirror.

In these exemplary environs John Cheever traces the fateful intersection of two men: Eliot Nailles, a nice fellow who loves his wife and son to blissful distraction, and Paul Hammer, a bastard named after a common household tool, who, after half a lifetime of drifting, settles down in Bullet Park with one objective—to murder Nailles's son. Here is the lyrical and mordantly funny hymn to the American suburb—and to all the dubious normalcy it represents—delivered with unparalleled artistry and assurance.
John Cheever was born in 1912. He is the author of seven collections of stories and five novels. He won the National Book Award for The Wapshot Chronicle and the National Book Critics Circle Award and the Pulitzer Prize for The Stories of John Cheever. He also received the Howells Medal for Fiction and the National Medal for Literature. He died in 1982.
"John Cheever is an enchanted realist, and his voice, in his luminous short stories and in incomparable novels like Bullet Park and Falconer, is as rich and distinctive as any of the leading voices of postwar American literature." —Philip Roth

"Cheever's deepest, most challenging book. It has the tone of a summing-up and the tension of a vision." —The New York Times

"In a class by itself, not only among Cheever's work but among all the novels I know." —Joseph Heller

"John Cheever's prose is always a pleasure to read because it is both graceful and governed." —Chicago Tribune