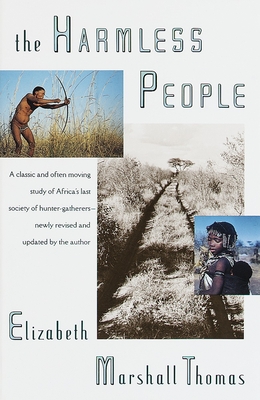 
Available to Order - Usually Arrives in Our Store in 4 to 7 Days
“A study of primitive people which, for beauty of . . . style and concept, would be hard to match.” —The New York Times Book Review

In the 1950s Elizabeth Marshall Thomas became one of the first Westerners to live with the Bushmen of the Kalahari desert in Botswana and South-West Africa. Her account of these nomadic hunter-gatherers, whose way of life had remained unchanged for thousands of years, is a ground-breaking work of anthropology, remarkable not only for its scholarship but for its novelistic grasp of character. On the basis of field trips in the 1980s, Thomas has now updated her book to show what happened to the Bushmen as the tide of industrial civilization—with its flotsam of property rights, wage labor, and alcohol—swept over them. The result is a powerful, elegiac look at an endangered culture as well as a provocative critique of our own.

"The charm of this book is that the author can so truly convey the strangeness of the desert life in which we perceive human traits as familiar as our own. . . . The Harmless People is a model of exposition: the style very simple and precise, perfectly suited to the neat, even fastidious activities of a people who must make their world out of next to nothing." —The Atlantic
Between 1950 and 1956 Elizabeth Marshall Thomas accompanied three expeditions to visit the Bushmen hunter-gatherers of Southwest Africa (now Namibia) and Bechuanaland (now Botswana). At that time the Bushmen were the last significant population who still lived by hunting and gathering, the economy practiced by all human beings and the ancestors of human beings for millions of years. Few firsthand accounts of hunter-gatherer life were written before her book The Harmless People, and because, since its publication, most Bushmen have been evicted from their old homes or forced to change their traditional ways, it remains one of only a few accounts of the old way of life. Thomas, who has spent the last 20 years studying animal behavior, makes her home in New Hampshire. Her other writing includes a nonfiction book about Dodoth pastoralists in northern Uganda, Warrior Herdsmen, and a novel about prehistoric hunter-gatherers in the Northern Hemisphere, Reindeer Moon.