The Inmates Are Running the Asylum: Why High Tech Products Drive Us Crazy and How to Restore the Sanity (Paperback) 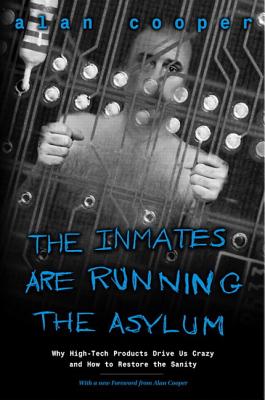 The Inmates Are Running the Asylum: Why High Tech Products Drive Us Crazy and How to Restore the Sanity (Paperback)

Imagine, at a terrifyingly aggressive rate, everything you regularly use is being equipped with computer technology. Think about your phone, cameras, cars - everything - being automated and programmed by people who in their rush to accept the many benefits of the silicon chip, have abdicated their responsibility to make these products easy to use. The Inmates are Running the Asylum argues that, despite appearances, business executives are simply not the ones in control of the high-tech industry. They have inadvertently put programmers and engineers in charge, leading to products and processes that waste money, squander customer loyalty, and erode competitive advantage. Business executives have let the inmates run the asylum In his book The Inmates Are Running the Asylum Alan Cooper calls for revolution - we need technology to work in the same way average people think - we need to restore the sanity. He offers a provocative, insightful and entertaining explanation of how talented people continuously design bad software-based products. More importantly, he uses his own work with companies big and small to show how to harness those talents to create products that will both thrill their users and grow the bottom line.

As a software inventor in the mid-70s, Alan Cooper got it into his head that there must be a better approach to software construction. This new approach would free users from annoying, difficult and inappropriate software behavior by applying a design and engineering process that focuses on the user first and silicon second. Using this process, engineering teams could build better products faster by doing it right the first time. His determination paid off. In 1990 he founded Cooper, a technology product design firm. Today, Cooper's innovative approach to software design is recognized as an industry standard. Over a decade after Cooper opened its doors for business, the San Francisco firm has provided innovative, user-focused solutions for companies such as Abbott Laboratories, Align Technologies, Discover Financial Services, Dolby, Ericsson, Fujitsu, Fujitsu Softek, Hewlett Packard, Informatica, IBM, Logitech, Merck-Medco, Microsoft, Overture, SAP, SHS Healthcare, Sony, Sun Microsystems, the Toro Company, Varian and VISA. The Cooper team offers training courses for the Goal-Directed(R) interaction design tools they have invented and perfected over the years, including the revolutionary technique for modeling and simulating users called personas, first introduced to the public in 1999 via the first edition of The Inmates. In 1994, Bill Gates presented Alan with a Windows Pioneer Award for his invention of the visual programming concept behind Visual Basic, and in 1998 Alan received the prestigious Software Visionary Award from the Software Developer's Forum. Alan introduced a taxonomy for software design in 1995 with his best-selling first book, About Face: The Essentials of User Interface Design. Alan and co-author Robert Reimann published a significantly revised edition, About Face: The Essentials of Interaction Design, in 2003. Alan's wife, Susan Cooper, is President and CEO of Cooper. They have two teenage sons, Scott and Marty, neither of whom is a nerd. In addition to software design, Alan is passionate about general aviation, urban planning, architecture, motor scooters, cooking, model trains and disc golf, among other things. Please send him email at inmates@cooper.com or visit Cooper's Web site at http: //www.cooper.com.