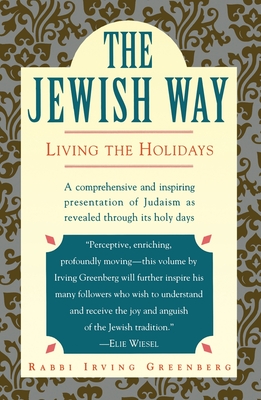 
Available to Order - Usually Arrives in Our Store in 4 to 7 Days
Called “enriching” and “profoundly moving” by Elie Wiesel, The Jewish Way is a comprehensive and inspiring presentation of Judaism as revealed through its holy days.

In thoughtful and engaging prose, Rabbi Irving Greenberg explains and interprets the origin, background, interconnections, ceremonial rituals, and religious significance of all the Jewish holidays, including Passover, Yom Kippur, Purim, Hanukkah, Holocaust Remembrance Day, and Israeli Independence Day. Giving detailed instructions for observance—the rituals, prayers, foods, and songs—he shows how celebrating the holy days of the Jewish calendar not only relives Jewish history but puts one in touch with the basic ideals of Judaism and the fundamental experience of life.

Insightful, original, and engrossing, The Jewish Way is an essential volume that should be in every Jewish home, library, and synagogue.
Rabbi Irving Greenberg is former President of the National Jewish Center for Learning and Leadership. He has lectured in every major city in the United States and has written numerous essays and monographs. He lives with his wife, Blu Greenberg, in Riverdale, New York.