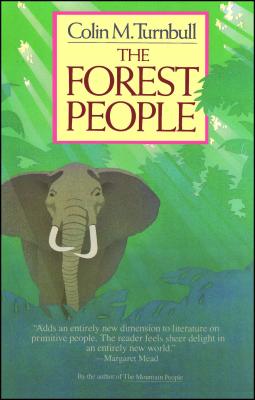 
Available to Order - Usually Arrives in Our Store in 4 to 7 Days
The bestselling, classic text on one anthropologist’s incredible experience living among the African Mbuti Pygmies, and what he learned from their culture, customs, and love of life.

In this bestselling book, Colin Turnbull, a British cultural anthropologist, details the incredible Mbuti pygmy people and their love of the forest, and each other. Turnbull lived among the Mbuti people for three years as an observer, not a researcher, so he offers a charming and intimate firsthand account of the people and their culture, and especially the individuals and their personalities. The Forest People is a timeless work of academic and humanitarian significance, sure to delight readers as they take a trip into a foreign culture and learn to appreciate the joys of life through the eyes of the Mbuti people.
Colin M. Turnbull was born in London, and now lives in Connecticut. He was educated at Westminster School and Magdalen College, Oxford, where he studied philosophy and politics. After serving in the Royal Naval Volunteer Reserve during World War II, he held a research grant for two years in the Department of Indian Religion and Philosophy at Banaras Hindu University, in India, and then returned to Oxford, where he studied anthropology, specializing in the African field.

He has made five extended field trips to Africa, the last of which was spent mainly in the Republic of Zaïre. From these trips he drew the material for his first book, The Forest People, an account of the three years he spent with the Pygmies of Zaïre.

Mr. Turnbull was a Professor of Anthropology at George Washington University in Washington, D.C. He is a Research Associate at the American Museum of Natural History in New York, and a Corresponding Member of Le Musée Royal d'Afrique Centrale.

Margaret Mead Adds an entirely new dimension to literature on primitive people. The book is constructed with great dexterity, so that the reader is carried along by the charm and movement of the narrative, almost unaware of the underpinning of arduous scientific field work that lies like bedrock below....The reader feels sheer delight in an entirely new world.

From the Foreword by Harry L. Shapiro Department of Anthropology, American Museum of Natural History The book is exceptional....The reader can enter into...the exhilaration of participating in a culture other than his own....Reading The Forest People is an unusual and satisfying experience.